The Lorne scoreboard at Stribling Reserve sits just above the Great Ocean Road, at the foot of the Otways. The scoreboard was donated by the Kambouris family in 1996. Peter and Jim Kambouris played for the Dolphins in the 1980s. The family owns or has owned various coastal businesses, including the general store in Aireys Inlet and the Grand Pacific Hotel overlooking Loutit Bay and the Lorne pier. 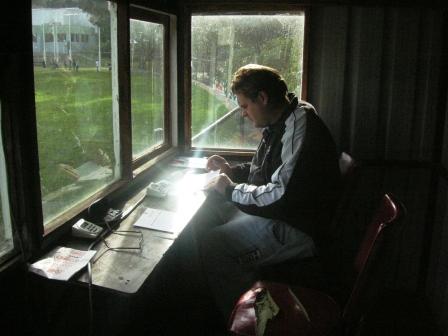 Rick Dosser has been tending to scoreboard and timekeeping duties this year. “I do all the home games and all the away games,” he said, “unless the reserves are short of players.”

What position do you play? “Off the bench.”

Rick lives in Aireys Inlet, about 75 bends away along the Ocean Road. When not thinking about goals and points or the seconds ticking away he does garden maintenance along the coast.

“I like doing  the scoreboard and the timekeeping. You’re under shelter and you get a good view of the whole game.”

The green tin enclosed Kambouris scoreboard replaced a simple timber board, once a blackboard, which is now at the southern end of the ground and features the club mascot and logo.

If young Ed Armistead hadn’t have been late to run the boundary on the old foreshore ground at Lorne he might never have spent the next 50 or so years looking after the scoreboard.

And he might never had so many yarns to tell. “ There was already someone ready to run the boundary so the club president, Charles Howarth, asked me to do the scoreboard. It was Deans Marsh versus Lorne, and Lorne won that day. Every name on the Deans Marsh team-sheet said ‘Clissold’. There were plenty of Clissold families around the Marsh in those days.”

In the early 1960s the club moved from its foreshore ground (“At high tide boundary umpires sometimes had to wade in  to retrieve the ball.”) up to Stribling Reserve. There, the scoreboard was fashioned from an old blackboard. “I’d write the team names up each week in chalk,” recalled Ed. “Too bad if it rained.”

Ed weathered the elements and looked after the blackboard scoreboard for about 30 years, until the Kambouris scoreboard was opened in 1996. “It was good to be inside, but there were no chairs for the first game. By the second game there were chairs – salvaged from the tip.”

Ed remembers the numbers being well-made, with the sharp edges filed off. “But if the wind came up, the numbers might blow off and end up on the paddock, on the ground. We sorted that out eventually.” Nowadays the Lorne scoreboard has digital-manual numbers, meaning current scoreboard attendant Rick Dosser has to change the scores with the numbers upside down. 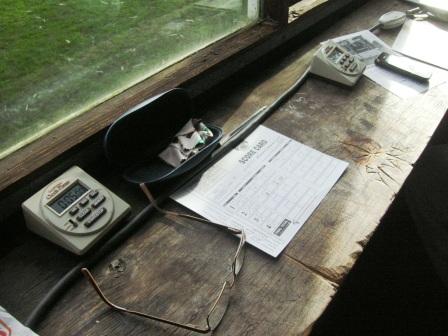 Ed Armistead combined scoreboard duties with timekeeping and cursed the days when the power went off. “I had to run onto the ground at the end of one game to tell the umpire the game was over. Someone reckoned Lorne should have had its score deducted because there was an extra man on the ground. You laugh about it now.”

One day Ed found himself having a good natter with his colleague from Apollo Bay, and a visitor. “I was explaining to this bloke about the different players and their names as I kept my eye on the game. Finally I turned to the chap and asked him his name. ‘Billy Brownless’, he said.”

The secret to being in charge of the scoreboard, and the timeclock, was, says Ed, “to keep your trap shut. You’re not allowed to barrack.”

Such impartiality would also have been required during Ed’s 30 years as a member of the Colac and District  League Tribunal.

A former sawmiller (his father had sawmills in Kennett Rover and Allenvale) and former president of the Lorne Football Club, Ed’s last game in the scoreboard was in 2008, with Lorne beating Birregurra “in a reasonably close game.”

Now living in Geelong, Ed doesn’t get to as many games as he’d like but every Monday morning he checks the scores in the Geelong Addie. Last Monday he would have seen that the game against reigning premiers Irrewarra Beeac  on 23 July see-sawed until the final quarter when the home team pulled away to win by five goals, boosting its chances of making the finals.

The two clubs have a strong recent rivalry, having squared off in three successive grand finals, with Lorne winning flags in 2006 and 2007 and the Bombers beginning their hat-trick in 2008.

Lorne plays in the Colac and District League. It formed in 1896 and has won 18 premierships. 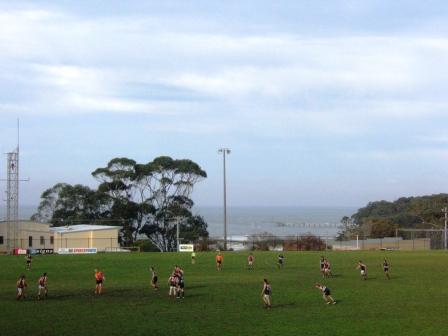 More about the club’s early days (from the Footy Almanac).