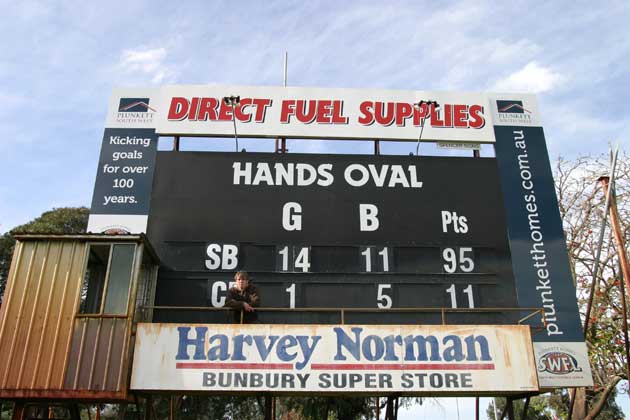 This is a one-year job only for Kody. Next year he intends playing colts for the Tigers and then seeing if he can make his way into senior ranks. For now he’s happy being able to make some money while watching the footy… and there’s a free lunch thrown in. 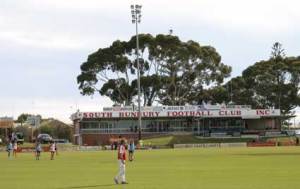 South Bunbury is the most successful team (and currently top again in 2011) in the South West Football League – the strongest country league in WA. The club was formed in 1897. The SWFL began in 1957 and South Bunbury has won 14 premierships, the last in 2002.

The roll call of past players is impressive. Syd Jackson first played senior football with the Tigers in 1960 and won the SWFL’s top honour the Hayward Medal in 1961 and 1962 before going on to star with East Perth and Carlton.

How did a team that plays in red and white get to be called the Tigers? According to the club website South Bunbury was considered so far from the main Bunbury townsite that it was referred to as tiger country. There is no shortage of footy contradictions at the Tigers – the club song begins “… good old South Bunbury forever/ we know how to play the game / side by side we stick together/ to uphold the Tigers name.” Sound familiar?

Meanwhile as South Bunbury edges towards an elusive 15th SWFL premiership (the total is closer to 40 when you count the pre-SWFL days) you can be sure Kody will be watching every moment of every colts, reserves and league game at Hands Oval like a hawk. He wants to keep his perfect record intact.
LES EVERETT