The Victoria Park scoreboard was demolished on 10 February 2011. In its place now is The Final Siren, a sculpture installed on 2 November 2011.

Deep in the heart of Collingwood – amongst the high-rise flats, the factories and the warehouse apartments – a sculptor sits at his work bench and ponders the old scoreboard at Victoria Park.

And Anderson Hunt vividly remembers the supporters: hard-core, hard-working supporters. He especially remembers the miracle of the thermos. In his proposal to the City of Yarra to build a sculpture on the site of the old scoreboard he described watching a woman under the scoreboard drinking from a thermos and then pulling out, one by one, seven hot dogs, for the tribe crouched around her. After placing each hot dog in a piece of white bread and handing them to her children she gulped down the last of the ‘hot dog tea’.

Deep in the heart of Collingwood – just a few Thorold Merrett stab passes from the old Sherrin football factory in Wellington Street – Anderson sits at his work bench and starts sketching out ideas for his sculpture. He had had the fortune of spending a day in the scoreboard as part of his research, mulling over ideas while walking the floor and sipping tea from, yes, a thermos.  “It would have made a great studio,” he says, “with its hardwood floor, its kitchen sink, its various levels.” 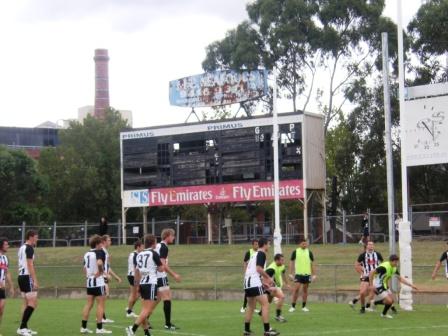 Anderson also had the distinction of being one of just a few people to witness the demolition of the scoreboard last February. Before the wreckers came in he was able to salvage some precious parts: number rolls, name plates and the spring-loaded winding mechanisms with their bike sprockets and wooden handles.

Deep in the heart of Collingwood – just a few (okay, quite a few) Sav Rocca drop punts from Victoria Park – Anderson starts finalising plans for the sculpture. Made of epoxy-coated steel, it will weigh two and a half tonnes. It will be six metres long, two metres wide and four metres high. About half the size of Bob Hill’s scoreboard.

It will be called The Final Siren.

Anderson, though, can’t build it on his own. He hires engineers, fabricators, sandblasters, truck drivers, crane operators and an expert in 3D Computer-Aided-Drawing.

Gradually the sculpture takes shape and on 2 November it was installed at Victoria Park, one of four artworks that are part of the $7.2million redevelopment of the famous ground.

“I see The Final Siren as a homage to those hard-working Collingwood fans who stood in the outer and barracked their hearts out,” Anderson says. “Without the hard-core supporters, the club would be nothing.

“I hope the sculpture gives Collingwood fans a sense of pride, that pride that’s like wearing a tight footy jumper with big numbers on the back.

“I feel honoured to have had the chance to create this sculpture, knowing that what was there beforehand stood for so much.” 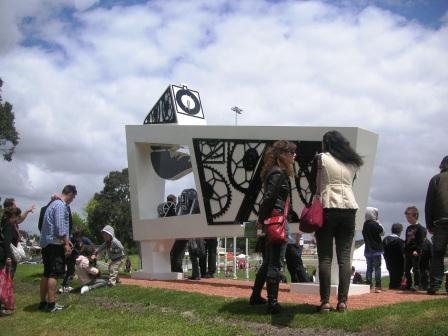 The Final Siren, and three other artworks, was officially unveiled on Sunday 4 December. More details