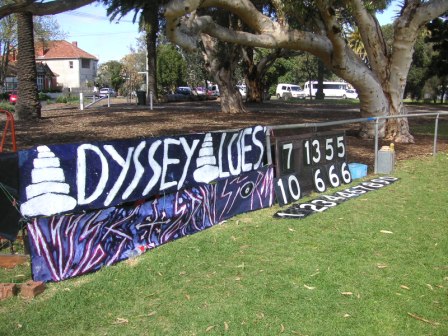 August 2011 and the scoreboard bloke at the Peanut Farm oval was having a rough trot. It was the first of three 2011 Reclink Cup grand finals for the day and the goal umpires had given him a bum steer in the third quarter. To make matters worse the match commentators, guests from a community radio station broadcasting across the ground as well as across Melbourne, rightly pointed out that the three-quarter time scores may not be correct. The scoreboard bloke took this as a personal criticism, when it was in fact a community announcement. (I took it as not a good time to ask him to pose for a photo.)

Instead of using the Peanut Farm’s usual scoreboard, an old bus shelter on the Spenser St forward flank, the scoreboard bloke had fashioned his own scoreboard from a screen door and placed it in the Chaucer St forward pocket (as opposed to the Shakespeare Grove pocket.) The top numbers on his scoreboard hung from hooks, while the bottom numbers rested on the grass. (As for the home that once hosted the wire door, it probably had a fair few mozzies and flies over summer.) 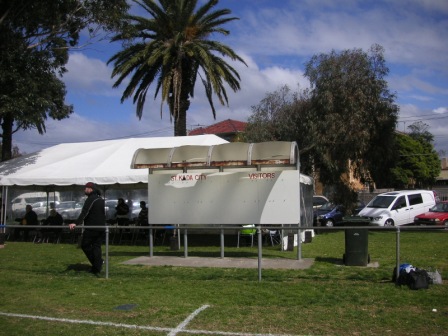 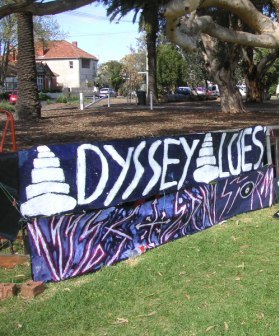 The scoreboard bloke was also responsible for stringing up the teams’ boundary fence banners. This required an ingenuity with string and weights he thought not appreciated by the general populace, especially given that he had to put up and take down three sets of banners throughout the day.

The last straw for him was when a volunteer from the canteen brought him a soft drink and a hamburger. ‘No bloody sauce!’ he said. Or words to that effect.

The Odyssey Blues, by the way, a team of players from drug-rehabilitation centre Odyssey House started brightly, with the first goals of the match, but the Western Storm, in Bulldogs colours, proved too nimble for their bigger-bodied opponents. 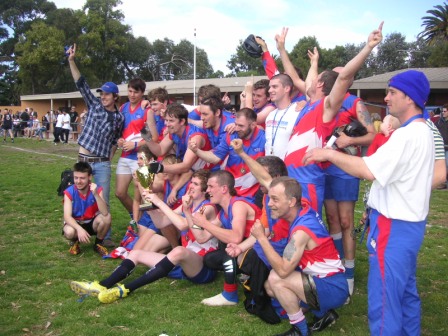 The Reclink Cup provides support, friendship and direction for people living hard. In 2011 the competition had 48 teams across Australia, playing across five states and territories.

The Peanut Farm Reserve has been the home of the St Kilda City Football Club since the 1940s. The club plays in Melbourne’s Southern Football League.

The ground is just a torpedo or two from Luna Park and a few drop-kicks from the Palais Theatre. Some days you’ll hear the Luna Park patrons screaming with seeming delight. Some nights you might hear, or think you can hear, Lucinda Williams at the Palais. Or Jackson Browne. Or Bruce Springsteen. Or Bob Dylan. Or RocKwiz. Or Rickie Lee Jones. Or Ray Davies. Or Bill Bailey…

The name of the reserve derives from the fact that it was indeed a peanut farm, during World War II. Apparently US soldiers were keen for fresh peanuts. There’s also a story that a hundred or more years ago the reserve was a small racecourse and the gambling currency was, yep, peanuts.

More details about The Reclink Cup