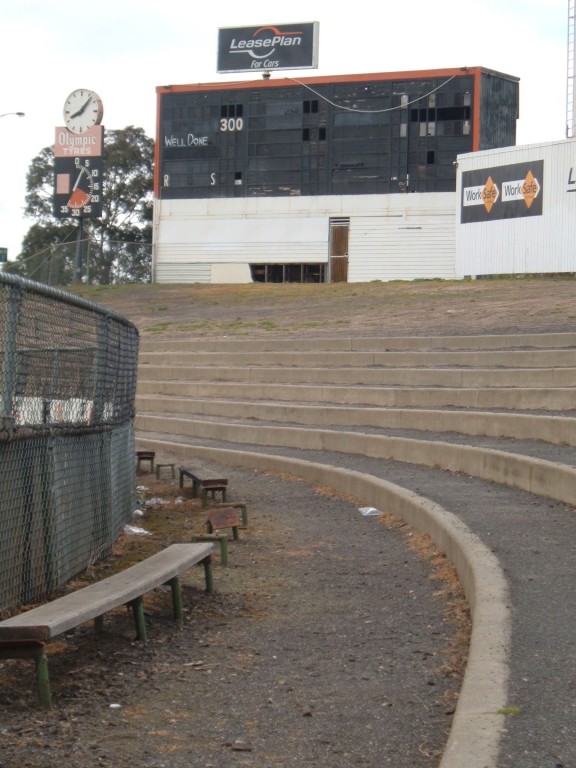 Photos by John Carr of the Holyboot Football Emporium.

The  last Whitten Oval (or Western Oval) scoreboard stood in the forward pocket at the West Footscray Station end of the ground from the 1970s to its demolition in November 2005.

Rohan Smith, the last Western Bulldogs player to kick a goal at Whitten Oval back in 1997, said in a press release at the time of the demolition:  “The scoreboard really is an icon of Whitten Oval. Having grown up just around the corner in Kingsville I have some great memories of the ground, not only as a player but also as a young kid coming to watch the games.”

The-then CEO of the Western Bulldogs, Campbell Rose, stated: “The demolition of the scoreboard is the beginning of many exciting changes that will be taking place in the first phase of the redeveloped oval.”

The ‘exciting changes’ featured “a state-of-the-art elite training facility and community hub funded by an $8 million grant from the Federal Government, up to $3 million from the AFL, and $3 million apiece from the State Government and the Western Bulldogs’ Forever Foundation.” (The Age, 17 January 2006) 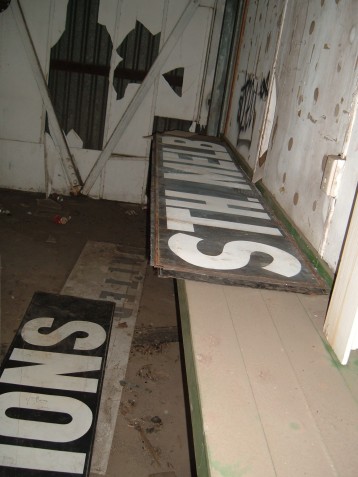 John Carr took the above photos in November 2005. He says on his charming HolyBoot Football Emporium website: “Whilst snooping around, I ventured into the scoreboard, quite tentatively as I’d heard that it was a home to squatters. This photo shows the old South Melbourne board, which must have sat there gathering dust since 1981. How I wish that I had grabbed the sign!”

The Olympic Tyres clock was probably as well-known as the scoreboard. It was not dem- olished and is apparently in storage. The clock was designed by Frank Soraghan, a West Footscray rover  who lived four blocks from the Western Oval. His daughter Kerrie tells the story on The Footy Almanac website: ‘Dad didn’t get ‘drafted’ to the team his family naturally supported; when he won the Footscray and District Best and Fairest as a 17-year-old he was ‘asked down’ to train. The local paper was excited about the prospects of the young rover, who they called a ‘natural’ with a ‘brilliant future’.

‘But Dad’s timing wasn’t the best. He came to the club in 1955, right after that solitary premiership. It was a rare strong era, a champion team that was hard to break into. Dad got named on the bench a couple of times, but in those days, you didn’t get to come on unless there was an injury.

‘Finally, family legend has it, the young bloke got told by Charlie Sutton that he would start in the 18 that week. Riding his bike home from his job at the Olympic Tyre Factory, the wheels somehow got caught in the Maribyrnong tram tracks.  In a twist befitting a Leunig cartoon, Dad fell off, breaking his ankle. The club traded him to Tongala at the end of the year. The future of the promising young lad was over before it began.

‘Later, Dad worked as a mechanical draftsman and engineer for Olympic Tyres in Cross St, where he designed the ‘Olympic clock’: a recognisable (iconic could be too strong a word) feature of the Western Oval landscape.’ 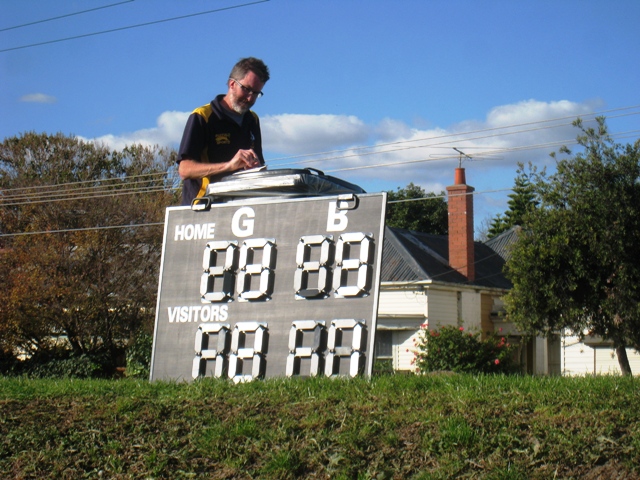 Over the years the Footscray/Western Bulldogs Football Club has had its disagreements with the local council. One of those disagreements, back in 1934, concerned a scoreboard:

At a meeting of the Footscray Council on Tuesday the city engineer (Mr. A. E. McCausland) submitted plans for a new scoring-board at the Western Oval. He said that the existing scoring board, which was not the property of the council, was unsatisfactory. The new board would cost approximately £150 and provision would be made for the inclusion of a clock.

The mayor (Councillor F Hester) opposed the proposal. The council, he said, had already spent a large sum on improvements to the oval and if a new board were needed the football authorities should do something to help themselves.

It was decided to take no action.

The council adopted the engineer’s plans for new public conveniences at the Western Oval.’ 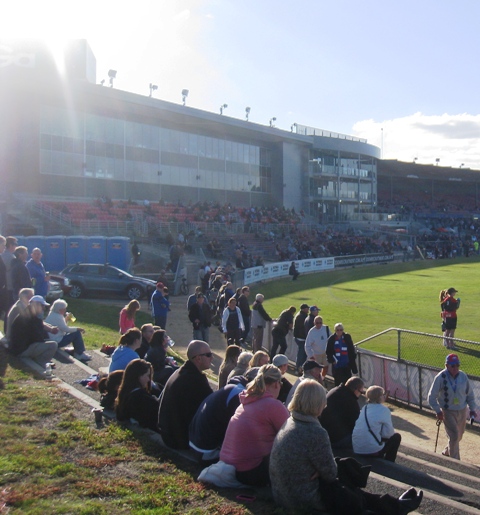 Many, many thanks to John Carr of the Holyboot Football Emporium and to Kerrie Soragahan and her Footy Alamanac story.