The scoreboard at Apollo Bay has had a makeover in recent times, including a new window and new exterior: timber instead of corrugated iron, mission brown paint-job instead of cream and a swapping of the ‘BAY’ and ‘VIS’ signs and scores.

The Frank Murnane Scoreboard was all locked up when I dropped by, back in February 2010. So I pottered about the ground. It backs onto the Great Ocean Road, faces the hills and is part of the local caravan park.  Apollo Bay, the Hawks, play in the Colac & District League, a mixture of country, coastal and bush clubs. They finished the 2012 season ninth, with six wins. 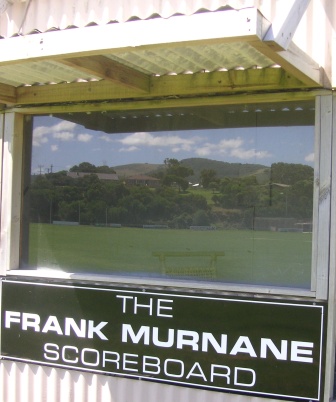 I was quite taken by the reflection in Frank Murnane’s mirrored pane. There’s the footy ground, some houses, and then the hills. 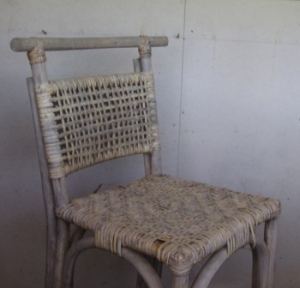 I also spied, though the reflection, an old wicker chair. Not quite a rocking chair for Frank Murnane, or his successor, but a very nice piece of scoreboard furniture regardless.

A throne of sorts, you could say.

One of the Hawks’ past players is 63 year old author Bruce Pascoe, who played til he was in his 40s. His son Jack is keeping the family name going at the club.

Footballer and writer Matt Zurbo wrote an excellent piece about Bruce Pascoe in The Footy Almanac last February. Matt played four seasons with Apollo Bay, as well as coaching the juniors. He played many more seasons with his beloved Otway Districts.

The Gellibrand oval is a home ground of the Otway Districts Football and Netball Club, also part of the Colac comp.

Otway Districts were formed in 1982 through the merger of Otway Rovers and Gellibrand.

Otway Rovers were formed in 1957, through the mergers of  Johanna, Beech Forest and Lavers Hill Imperials.

Another club, Carlisle River, were absorbed by Otway Rovers in 1974.

The Demons’ scoreboard is a sponsor’s delight, with advertising very much front and centre.

The club’s theme song mentions the scoreboard, which is a nice touch:

We’re a mighty team at Otway

We wear the colours Red & Blue

Opposition will be brushed aside

When they meet the tried & the true

We’re the champions from the Otways

We’ve got the score up on the board

Otway District will be Winners

We will fight for Victory

We are the Greatest Team of all

Peter Maskell photographed the Gellibrand ground during a lunch break, while working as a survey officer for the local water board. Peter is also a musician.