The picture above shows the magnificent R.J.Sutton Scoreboard at Berwick’s Edwin Flack Reserve on Manuka Road. Berwick plays in the strong Casey Cardinia FNL these days, but the club is probably best remembered for a five year stint in the VFA from 1983 to 1987. Berwick had to endure a long court battle to win a clearance from the South West Gippsland FL and take its place in the VFA. Finally, on the Wednesday four days before the first game, Berwick won its case and was admitted to Victoria’s second tier competition. Berwick debuted at Box Hill and, not surprisingly, given its interrupted preparation, suffered a substantial defeat, 11.11 to 31.16. The Wickers won five games in 1983 and ran ninth in the twelve club Second Division. The Wickers were still playing home games at Arch Brown Reserve in 1983-84, as they had been doing for over 100 years.

Berwick enjoyed its best VFA season in 1984 when it won seven games and briefly challenged for a finals place. Getting to Berwick was a nightmare for a car-less VFA supporter in those days, as the electric trains did not run beyond Dandenong on Sundays. There was only one country train that was suitable, so my trip to the Berwick-Oakleigh game in July 1984 involved a pre-dawn bike ride to the station, and a train trip into the city to connect with the 9.37am Bairnsdale train. This deposited me at Berwick about four hours before the game was due to start.  A late goal from Rob Williams gave the Oaks a two point win and made the trip worthwhile, although the return trip was just as long.

At this time, the Berwick club had a long term plan to move to a new complex at Manuka Road for the 1987 season. This plan was brought forward two years after a disastrous fire that ripped through Berwick’s social rooms in December 1984. The fire destroyed about $40,000 worth of equipment, as well as all of the club’s records, trophies, flags and photos. After a concerted effort from club volunteers and the City of Berwick, the club was able to host its first game at Manuka Road on Sunday 21 April 1985 against Caulfield (the Bears won this game, 19.7 to 8.11).

Unfortunately, Berwick’s VFA career had already peaked by this time. The club returned to the South West Gippsland league in 1988. This turned out to be a good decision because the VFA Second Division only lasted for another twelve months.

The Berwick club seems to be thriving in 2014. There was a big crowd on hand for the season opener against close rival Beaconsfield. The Manuka Road ground was in superb condition – a far cry from the mid ’80s when the facilities and ground surface both left a little to be desired. One thing that hasn’t changed is the scoreboard. I’m reasonably sure that this scoreboard was erected during the VFA days. I’d say that the around-the-ground scores would have gone where the black advertising sign is now. 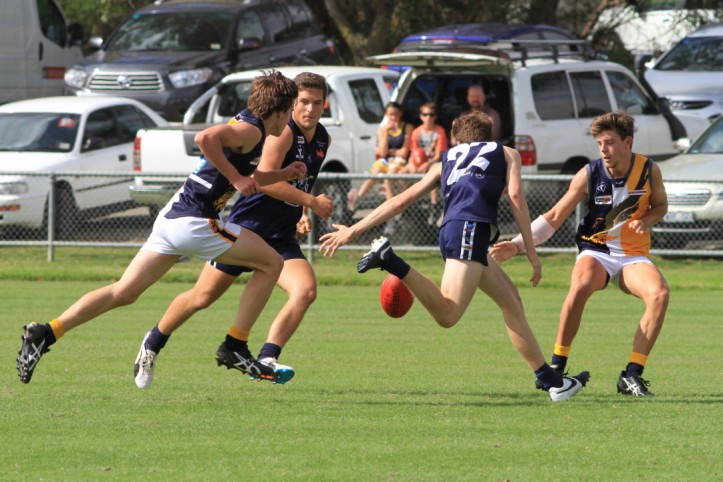 Berwick and Beaconsfield Under 19 players compete on the perfect surface at Edwin Flack Reserve, Round 1 2014.

A scene from Berwick’s first VFA fixture – at Box Hill in 1983. All black and white photos courtesy of The Gazette.

A rare incidence of a clash guernsey being worn in a VFA match – in fact, I can’t think of another example. Sunshine and Berwick both sported navy and white jumpers in 1983. In this match at Skinner Reserve, the Berwick side played in jumpers loaned by the Footscray FC. 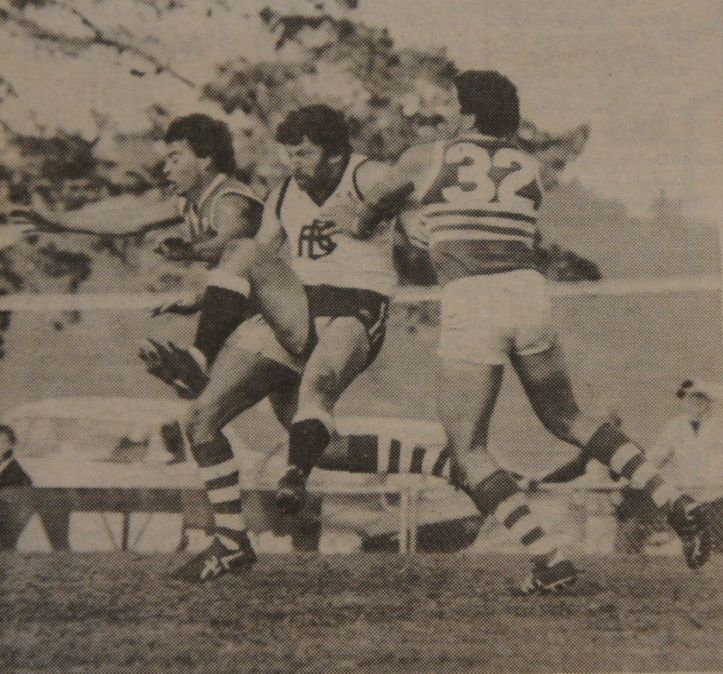 Berwick’s John Callery (brother of Paul Callery) shows off the Wickers’ new look for 1984 in a match against Moorabbin. This jumper looks pretty good, I think, but it only lasted for a season.

Here is what I was looking for! A shot of the old scoreboard at Berwick’s Arch Brown Reserve in 1984. I remember this board. It was mounted very low to the ground and there was a handy shelter for the scoreboard attendants (as shown). This picture was taken at a match against Waverley, with the visitors five points up just before quarter time. The Panthers went on to win, 8.14 to 5.10. 1984 was quite a wet season, and the Arch Brown Reserve did get pretty heavy. I like the ‘Wickerland’ sign in the background. 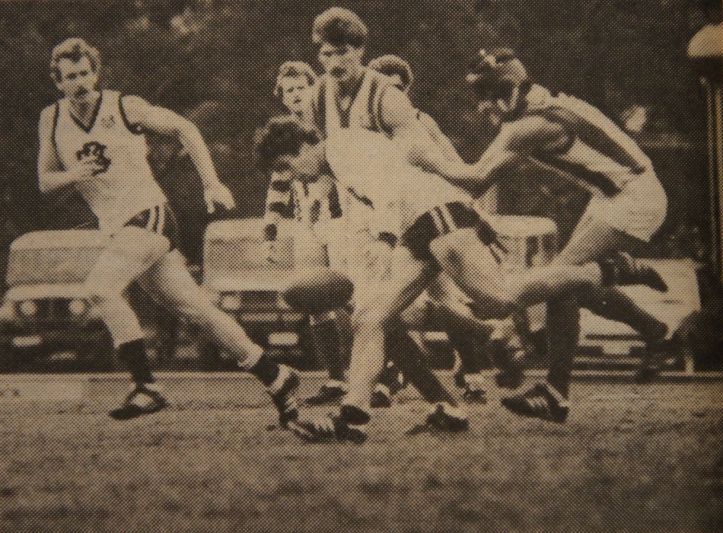 Tom Crebbin kicks under pressure against Mordialloc in 1984.

The aftermath of the disastrous fire that destroyed Berwick’s social rooms at Arch Brown Reserve in December 1984.

Another look at Berwick’s new jumper (used from 1985-87 in the VFA). This match was against Waverley. Berwick’s new design was white with dark blue hoops on the lower half, and gold collar, cuffs and numbers. The gold numbers were almost invisible against the white background (as shown in the photo), so it was difficult to identify the Berwick goalkickers and mark them in the Recorder.