Kingston Beach used to be to Hobart what St Kilda was to Melbourne – a day trip destination. Well-off people built their ‘shacks’ there, while the masses caught the ferry down there for the day with picnic baskets and fishing gear.

Yesterday I was in the area getting my fish and chips. I had fifteen minutes to wait so I went over to the oval to take some photos. On my way I saw a man net-fishing in the shallows, and a girl walking a rabbit. When I got there, the scoreboard was blank and locked up. I returned this morning when a series of junior games were scheduled but unfortunately they were not using the scoreboard.

Years ago we rented there for nine months for a change, while we built our house in town. The long walkway down to the beach from our street went past the Kingston Beach Oval and I would occasionally watch cricket there, and I have been to a few footy games. The ground is bounded by a very steep bank on one wing, a line of houses on the other wing, and beyond them the beach. Behind the northern goal and the 1970s Slim Mitchell Stand is the community hall and the main drag of cafes and shops. It’s a wonderful location right in amongst the life of the neighbourhood.

The oval is the spiritual home of the Kingborough Tigers. They joined the Tasmanian Statewide League in 2014 and as a condition of admittance, moved to the spacious surrounds of the new Twin Ovals Complex on the other side of Kingston. After a winless debut season and four wins last year, the Tigers have started 2016 with two wins from three.

I once walked around the beach area with a climate change consultant, for a work project. He showed us where the high water mark would be in 20 years – not good news for the future of the ground nicknamed “The Pit”. It is also a troubling outlook for local property developers, such as ex-VFL journeyman Garry Baker. He had two seasons at Footscray starting in 1972, then played 127 games at Melbourne before wrapping up with  6 games at Sydney in 1983. He came to Tasmania and played for the Tigers, and is named in their Team of the Half-Century. Baker is the driving force behind an increasing gentrification of the beach hospitality strip, with the daggy but relaxed ambience getting a bit of a hipster overhaul.

To be honest, the fish and chips were fair-to-middling. 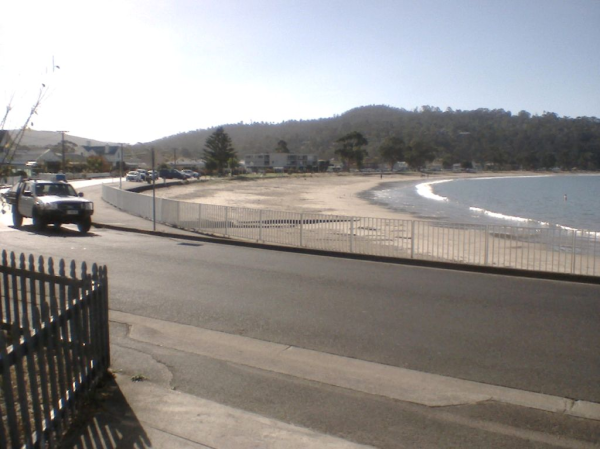 Today I visited Twin Ovals, the new home of Kingborough Tigers football club and the Kingston Crows cricket club. During the 2015 Cricket World Cup it was the training base for a few lower profile  teams such as Afghanistan and Scotland.

The Tigers played visitors Glenorchy (the Magpies) today and got a football lesson in both seniors and reserves.

The scoreboard is a slightly disappointing electronic affair, operated by remote control by an invisible hand. Although reasonably new it is already damaged, and rendered today’s visiting side as LCNURCHY. 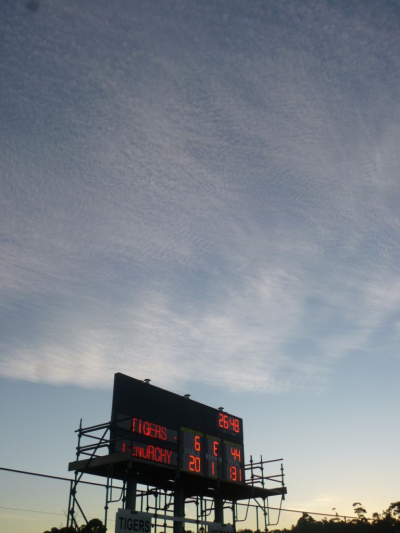 In the shadows of full time the virtues of the electronics did come to the fore, as the score was clearer than it had been all day.

Chris Rees  is a graphic designer and Scoreboard Pressure’s Tasmania correspondent. His tweeting life and his Instagrams.