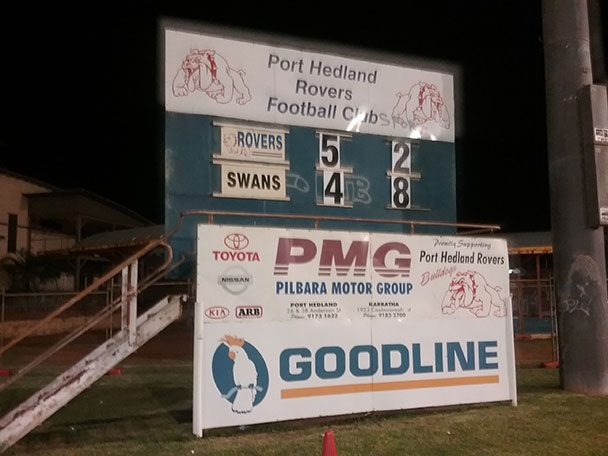 Words and photo by Derek Mott

It’s quite hard to fathom, but football wasn’t part of the culture of Port Hedland for its first 70 years. In 1895 the government commenced survey work for a port to service the pastoral industry in the region and there was also demand in the area for a townsite. Following the survey of lots, the townsite of Port Hedland was gazetted in 1896.

Port Hedland is named after the harbour of the same name on which it is situated and was named during explorations of the area in 1863 after Captain Peter Hedland, the master of the cutter Mystery, who discovered the entrance to the harbour. Hedland was a Dutchman who sailed the north-west coastal region supplying settlers in the 1860s – a century before Colin Matheson’s arrival in the town.

Formed in 1968, Port Hedland Rovers won the final Port Hedland Football League premiership in their debut season when they overcame the Port Hedland Panthers, 6.17 (53) to 6.8 (44). Joining the De Grey Football League in 1969, Rovers were a force to be reckoned with in the 1970s, winning five DGFA premierships and one DGWPFL flag in the decade. The Bulldogs defeated Goldsworthy by 72 points in 1971, before winning four on the trot between 1973 and 1976, three of these wins coming convincingly against local rivals the Port Hedland Panthers. The fifth title for the decade came against Goldsworthy in 1978. Their only blemish was a grand final loss to the Karratha Kats in 1979.

Pat Love was a prolific goal kicker for the club in the 1970s, taking out the DGFL goal kicking award each year between 1970 and 1974.

In recent years, Rovers took out a hat-trick of premierships between 2011 and 2013 against South Hedland, Karratha Kats and Wickham respectively, but their last grand final in 2014 resulted in a five-goal loss to the Kats.

In 2012 the Bulldogs gained the double chance and won the second semi final against Karratha Falcons by 51 points before taking out the grand final against the Karratha Kats by 31 points. The following season was the last leg of a hat-trick, with Rovers winning 11 games to finish second before defeating Wickham by 44 points in the second semi final and by 22 points in the grand final. In 2014, Rovers were minor premiers with a 12-2-1 record but the Karratha Kats were victorious in the grand final by five goals.

Last season the Bulldogs finished fourth with six wins and nine losses but suffered their first finals defeat in a number of years when Wickham won the first semi final by 19 points.

Former junior Blaine Boekhorst played football at Swan Districts in the WAFL before being drafted by Carlton and making his AFL debut in 2015.