Williamstown’s last home game in 2010 against Frankston was its last home game for some time. The ground and the grandstand are undergoing $8million of redevelopment. The 1975 scoreboard might get a makeover too, come 2012 when the Seagulls return to their nest.

Local resident Geoff van Wyngaaden knows the Willi scoreboards very well. “I started doing the scoreboard when I was in Grade 5, in 1966. One day, just before the game began, I noticed there was no-one at the scoreboard, so me and my mates looked after things. After the game the club secretary gave us each a free hot dog and offered to pay $1 per game. One dollar was a fair bit back then!

“Sometimes we were a bit too enthusiastic, hanging up the score for a goal before the Willi full-forward had had his shot. Fortunately he didn’t miss too many times, but it used to confuse the Channel Ten commentators.

“I looked after the old outside scoreboard on the flank with my mate Peter Nash, plus the newer enclosed scoreboard behind the goals until I was in my early 20s. I was more interested in chasing girls by then!”

(Geoff, on the right in each pic, with his mate Peter Nash and, in the third pic, Robert Wiederstein who went on to play 30 games on the backline with Williamstown)

The 1975 scoreboard featured big black numbers (painted by Geoff and his Dad) against yellow background. The board now has yellow numbers against black.

After Geoff went off chasing girls Noel Portingale was inside the scoreboard for 23 years until climbing the ladder became too difficult.

The above images are from a van Wyngaaden family home movie from the late 1950s or early 1960s, back in the days when people rode horses around Williamstown. On December 7 1961 The Argus newspaper reported: ‘The Press box and a storeroom at the Williamstown Cricket Ground were destroyed by fire early on Sunday morning. The fire was discovered at about 1.14 a.m. Firemen were hampered by a shortage of water. A tanker was brought from Newport to fight the blaze. Police are investigating the possibility that vandals may have started the fire. Recently in a strong wind the scoreboard did a back somersault and crashed to the ground.’

In 2008 I became the scoreboard attendant on a whim – and on account of no-one else applying for the position. After a rigorous recruitment process (“How’s your six times tables, mate?”) I got the gig. And soon learnt about scoreboard pressure. Kids climbing up the ladder. Kids kicking footballs at the scoreboard. Kids throwing rocks. And that was just the first game. The kids must have found better things to do in 2009 and 2010 because the scoreboard became a relatively sedate place, save for the occasional close game. 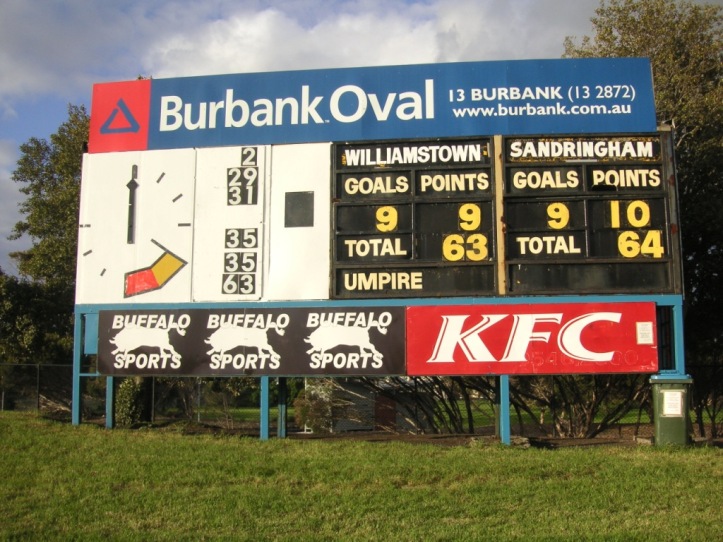 The black and white numbers on the left are not the ’round-the-grounds’ scores or the race or raffle results. They are the quarter-by-quarter scores and , in this instance clearly tell the story of a game in 2010 in which one end (the scoreboard or Point Gellibrand end) was the scoring end. Williamstown had the huge southerly wind in the last quarter but Sandringham managed to get a solitary, winning point at the grandstand end.

The Seagulls have won 15 premierships in the VFA/VFL, the most recent being in 2003.

For more details about the history of the Williamstown ground, watch Jesse Maskell’s 2009 ten minute documentary Where The Seagulls Nest.