I popped into the Port Colts ground at Murphy Reserve halfway through the second quarter of the reserves game against Altona. The bloke looking after the scoreboard was only doing half a game because he was playing in the seniors for Port Colts.

We chatted as he hung up the numbers and barracked for his mates.

“This is the first time I’ve done the scoreboard,” he said, as the play came onto our side of the ground.  “YOU’RE HOT MACCA, YOU’RE HOT, YOU’RE HOT!”

We talked about the Western Region League and how Port Colts is one of the stronger clubs. “Albion and Spotswood are dominating, then there’s us and Altona and Sunshine, so today’s game will tell us a fair bit. KEEP CHASING MACCA, KEEP CHASING.”

The league is rather lop-sided this year with the lower teams on the receiving end of some awful canings. “We beat Glen Orden by 40 goals the other week. It’s not good for the league or Glen Orden or us. We won, but nobody really wins.”

Then the half-time siren went and bloke zipped off to the clubrooms. After taking some photos I turned around to find the goal-umpires waving their flags at me,  giving me the all-clear.

I hopped on my bike and headed for the Melbourne Grammar ground just up the road in Garden City. Port Colts lost the reserves match, and the seniors. 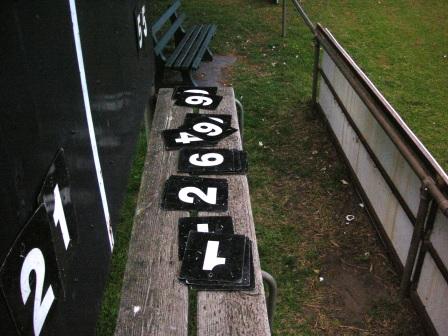