Recent shellackings by Geelong over Melbourne (186 points),  Geelong over Gold Coast (150 points) and Collingwood over Port Adelaide (138 points) have prompted much discussion about the possibility of the AFL becoming a rather lop-sided competition.

The Age’s Rohan Connolly went into some detail in an article on 7 August headlined ‘Scorebored’. He quoted Rodney Eade and Danny Frawley and a few other sages but what’s it like to be in charge of the scoreboard on such a day?

In my first season at Willi in 2008 the home team thrashed the Bendigo Bombers in both games. The reserves kicked about 36 goals (I scratched the final score in pen inside the scoreboard) while the seniors had a score of some symmetry: 50 scoring shots to five, and a winning margin of 155 points. 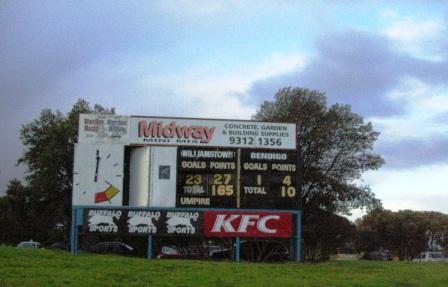