Sandy Bay versus Glenorchy, 1978. Photo and text courtesy of  Matt Cramond and Wikipedia.

The current North Hobart scoreboard was built in 1972 and was operating for the TANFL Grand Final that year. It was known as the Gorringe Electronic Scoreboard in its early years as it was sponsored by the Donald Gorringe truck motor company in North Hobart.

It was a four-floor structure built of corrugated iron with a wooden face with electronic scores on the top two floors with the lower level being a manually operated area for TFL and VFL/AFL scores. On occasion it also had NWFU and NTFA results. 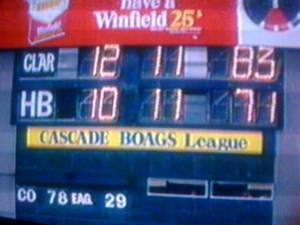 Three-quarter time in the 1990 TFL Preliminary Final between Clarence and Hobart. Matt Cramond notes: “Hobart went on to win the game and Collingwood can be seen serving it up to West Coast in the score updates.” 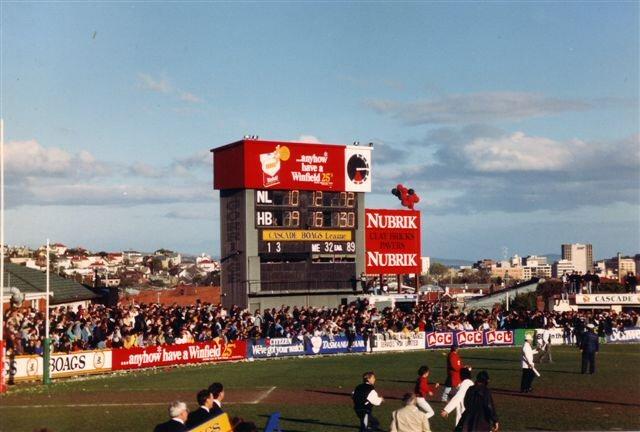 The top level of the North Hobart scoreboard had several hundred individual light globes that lit up to show each score. It had dials inside the board and large steel name-boards.

The globes had become pretty dodgy by the mid-1990s and quite often sparked. Eventually the lower wattage globes that were installed after that were, on sunnier days, not as easily visible as the original deep orange globes of the past and had gotten so bad that during the 2006 SFL Premier League Grand Final, the then President of the SFL instructed a group of youngsters to begin putting up the scores manually at the bottom.

After much trial and error with new systems, the Hobart City Council replaced the main electronic section with a new, but smaller face in 2011 at a cost of $46,000. It is fitted with red electronic numbers and electronic team names and operated via computer from the Doug Plaister Stand.

The manual section, apart from one SFL Grand Final,  has not been utilised at all since the mid-1990s.

The scoreboard’s second floor also briefly served as a time-keeper’s box during 1987 and 1988 after the original Letitia Street Stand was burnt down in 1987.

Note: The editors of Scoreboard pressure do not endorse  cigarette advertising.