September 10  was a big day at Central Reserve. Grand Finals always are.

I was standing under the grandstand with Trots and few rusty old Otway salts when Rocket saddled up.

“The Otway Under 17 girls are playing, but I just can’t watch netball! I went, I tried.”

“He lasted a minute,” his wife moaned.

“The netball…” I said to Eddy, and we were gone.

As we walked through the crowd I recognised a lot of faces, but had forgotten their names. Blokes I’ve played against over the past 20 years, fading into the background, looking less like they ever played football, while the young blokes and men on the oval bashed and crashed and chased.

I thought about netball. How sweet it is. Every comp should have both footy and netball. Goal posts and rings, I reckon.  It doubles a club, in colour, noise and movement.

Which doubles it again.

I told Scratcher, when he was president for a while:

“You want the boys to hang around, recruit three good looking netballer girls.”

Besides, sport is sport. I used to watch the netball sometimes. The good players, like Candy Robins and Sharron Hickey, always stood out, like they do in any field. They have that bit more

The good players, no matter what the code, are gold.

Courtside was packed! Bodies everywhere, tippy-toes only, a dead set cluster towards the back of the footy ground.

The final siren blew as Eddy and I pushed through the crowd. The game was done as we arrived. The hard working co-coaches, mother and daughter, embraced like teammates and family. The Otway girls ran into a huddle, hugging and squealing. It was the best!

None of us footballers punching air, making fists, yelling things like

“Shoved it up them!”

There were no words at all. Just pure, unadulterated tears and noise. It was the highlight of my day.

That moment, that unfettered emotion, victory, is always superb. 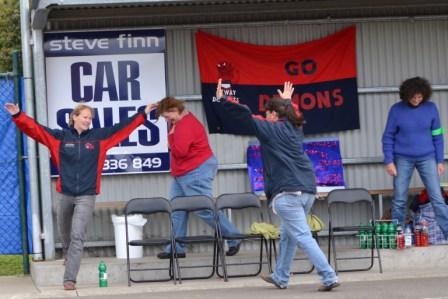 Grand Final victory, and jubilation for the mother-and-daughter co-coaches of Otway Districts.

“We didn’t miss a thing,” I told him. I would not have cared even if it was a footy game.

“Yeah,” he said, sounding like Rocket. “At least we tried.”

The scoreboard said they’d won by a point. Word was, with a minute left, they’d come from behind. “How good was that!” the Cons beamed, walking up to us.

“Fantastic!” I said, as me and Ed drifted, with the crowd, back to the football.

I looked at the final score before we left.

So simple. A ten dollar piece of tin that to some meant heartache, others dreams and memories. That held a crowd.

I was stoked for the netballers, for all their effort and yards. For the club and how they had dusted off the overgrown, poorly lit netball courts over the past few years.

And I was  happy for my old footy team. With netball wins like that, its social side and future felt that much more assured.

Matt Zurbo  is a is a former Otway Districts player and bush worker who now lives in Tassie. He writes regularly for The Footy Almanac.