Exact details of the construction of this scoreboard are sketchy. Sam Loxton played 12 Tests for Australia and 146 first-class games overall, with a highest score of 232 not out in state cricket. Ian Huntington, an all-rounder, played 46 games for Victoria between 1953 and 1976.

Loxton and Huntington played for Victoria against a Warrnambool XI in 1957/58. Huntington turned 80 in October this year and has unearthed some details about the game. “The game took place on November 2, 1957, and included  players Allen Aylett , Neil Crompton, Len Maddocks, Barry Stevens, John Shaw, John Salmon, etc. Sam Loxton was the captain and Bill Woodfull the manager. I made 36 and Sam made 52, so I have no idea what the numbers on the scoreboard mean! “

Ian Huntington, and wife Marie, shortly before his 80th birthday. Ian is still going strong, playing golf off a handicap of 13 and coaching many grandchildren and others at cricket.

Reid Oval opened for cricket in October 1951. Warrnambool Football Club moved there in 1956.

“The scoreboard looks a little different nowadays,” reported Janet McDonald of the Warrnambool Historical Society.  “The base has been bricked in to create a storeroom underneath and advertising hoarding has been added to the top.” 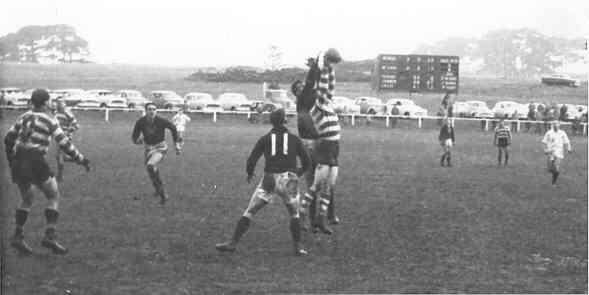