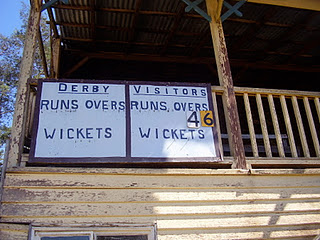 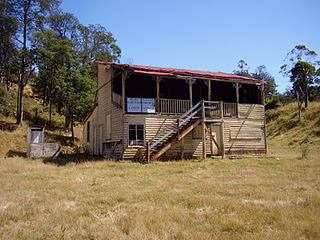 Once a prosperous mining village, Derby is now a classified historic town. You’ll find it 103 km north east of Launceston on the banks of the Ringarooma River.

The grandstand and scoreboard are relics and, if they are still standing, should be heritage-listed.

Derby has had a few sporting teams over the years. A 1912 newspaper article promoting an end of season challenge match between Derby and Pioneer suggests Derby Football Club won a flag 99 years ago in the NEFA (North East Football Association?). 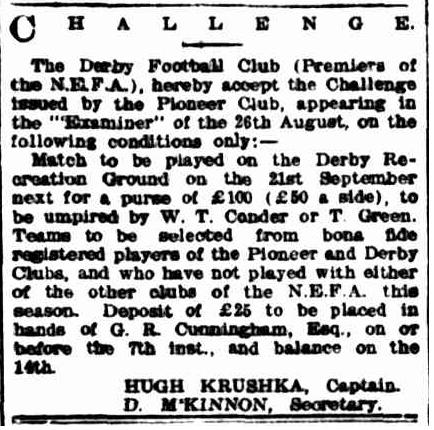 “The grandstand is a delight,” writes Daffey. “Besides offering the views towards the mountains, it features a bell suspended from the roof. Early in the twentieth century, members of the Krushka mining family used the bell to summon workers on their North View property for meals, and occasionally emergencies. After a while the family donated the bell to the football club. Timekeeper Alf Krushka rang it at the end of every quarter until he was too old to climb the steps into the timekeeper’s box.”

At one stage there was a Derby Football Association, where clubs vied for The Diggers Cup. 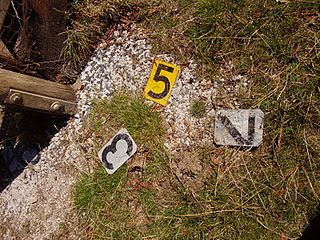 While it’s tempting to think the scoreboard numbers at Derby are ancient and were made from the town’s own tin a century ago, photographer Chris Rees notes: “The numbers are shop-bought and don’t look all that old in style.”

Chris describes himself as “a huge footy and cricket fan but also a graphic designer with a big interest in ‘vernacular typography’ – homemade numbers and letters.”

The Derby ground, via Google Earth: by creating a street-view from the Google Earth image you’ll glimpse the Derby grandstand, the cricket pitch and grazing cattle. (You create a street-view by moving the orange figure – a cyberspace scoreboard attendant? – across the ground to the Tasman Highway.)

Thanks to John of The Holyboot Football Emporium for the reference to Beyond the Big Sticks. Alas, the book -published in 2003 – is now out of print.