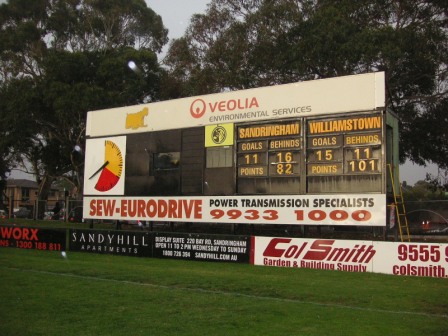 John Lysaght is a passionate, and vocal, Sandringham supporter. When a Sandy player was pinged for running too far without bouncing the ball in a desperate last quarter against Williamstown John voiced his displeasure at the umpire’s decision. And then added ruefully, “Our bloke did run too far.”

There are two scoreboards at the Trevor Barker Beach Oval: John looks after the main scoreboard, on the Beach Road wing, while camera-shy Doug Gardner tends to the boundary fence scoreboard on the opposite wing, between the interchange benches.

John, 57, has been a Sandy man all his life, growing up just a street away from the ground. “I could hear the siren from my place.”  Doug started following Sandringham in the 1980s when a friend’s grandson started playing for the Zebras.

John’s first official stint on scoreboard duty was back in 1972. Doug started hanging up the numbers by the ever-busy interchange benches five years ago. 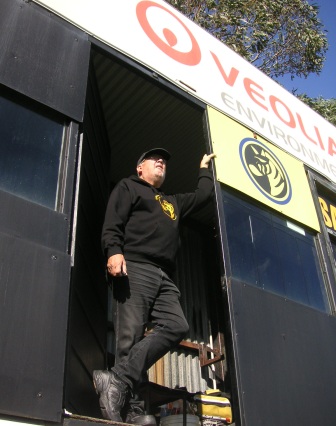 “I used to go to the seconds or Under 19s games on Saturdays when I was a kid,” John recalled. “There’d be no-one around – that’s when the seniors used to play on their own on Sundays – so I’d look after the scores sometimes.”

From 1972 to 1985 John and his mate David O’Brien were the official scoreboard attendants.

“The day before our first game, David and I had just finished painting the ‘Zebras’ sign on the roof of the grandstand  The roof was asbestos and the paint would soak in and just about disappear. It took us ages.  It’s a rather more professional job there now.”

John said his first official game was against Port Melbourne when VFL stars Ron Barassi and Bob Skilton were playing for the Borough. “There were 15,000 people here. It’s hard to imagine now. Then there was torrential rain at half-time and just about everyone left.”  John and his mate David got drenched, standing on the platform of the open-air scoreboard, which was at the northern end of the ground.

The current scoreboard, built of corrugated iron and replete with secondhand carpet, was built in the mid-1970s. “It was state of the art back then,” said John, in-between sliding lightweight yellow on black numbers into the grooves. John always put the total of the score on the board before the point or the goal. ‘”Always done it that way.”

John can remember when 3UZ used to broadcast VFA games from inside the scoreboard. “Me and David had to keep pretty quiet!”

Because he can’t see the numbers once he closes the gates, John also marks the score with a texta on the perspex window. He puts a dot under each number to signify he’s seen the umpires wave their flags. The system works well. Since returning to the scoreboard in 2008 he’s only made two mistakes.

John is a warehouse co-ordinator for a laminating company in nearby Cheltenham. He no longer lives a few spiral torpedoes from the ground, now driving almost an hour from Mornington for each game. He took up the chance to be in the scoreboard after having a go at being part of the stats team. “I had to keep an eye on the opposition players. I found it really draining trying to keep up with their numbers and names and stats. It’s hard work.”

The Sandy scoreboard is from the same mould as Geelong West’s scoreboard and the now demolished scoreboards at Oakleigh and Williamstown. “Our scoreboard was designed by a Sandy player, Neil Evans. He might have had a game or two with Essendon,” noted John, while watching the Zebras make a stirring final quarter comeback against Williamstown.

Kicking to the southern, or Nick Saunter, end, the Zebras had the wind behind their backs as they tried to rein in a five-goal deficit. But from the north a storm was coming and when the Zebras got to within a point, the rain came down, the Seagulls cleared and goaled from the centre a few times and the game was over.

“We lost it in the first quarter,” said John, waiting for the final all-clear from the goal umpires. “We didn’t kick a goal against the wind back then.”

In October 1998 the Beach Road oval was re-named the Trevor Barker  Beach Oval after the high-flying StKilda champion who died of cancer in 1996, aged 39. Barker coached Sandringham to its 1992 and 1994 premierships. A plaque just outside the social rooms says the re-naming was  ‘in recognition of Trevor Barker’s contribution to sport and the development of young people of the district.’

John Lysaght is a regular contributor, as ‘Zebraman’, to the VFL footy forum.