The first wicket fell on the first ball after the first drinks break. Clean bowled. The game was a 36-overs each semi-final between home team Williamstown CYMs third XI, and Seddon. Early March this year.

The Fearon Reserve was, more than a hundred years ago, the home ground for the Williamstown Football Club (which now plays just up the road in much grander facilities.) The Fearon is beside  the local botanical gardens and oppositeWilliamstown beach. The two grounds are home to two cricket clubs,  two football clubs, a lacrosse club, kite-flyers, dog walkers and, on Sunday mornings, a bunch of old blokes playing kick-to-kick.

A big win for the CYs third X1. They marched into the local one-day final by knocking over Seddon for just 52. (The wickets were tumbling so fast the scoreboard attendants couldn’t keep up.) 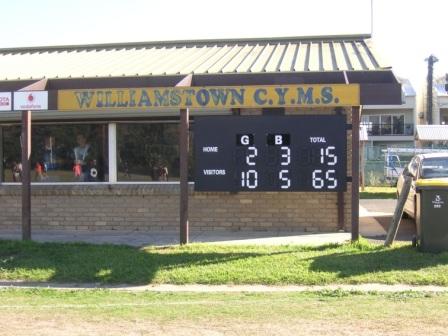 Half-time in the reserves (in 2010) and the home team’s not looking too good. They fared better in the second half but still couldn’t peg back Whitefriars, losing by nearly five goals. One of the highlights of the game was when CY’s ruckman Shagger (that’s what the coach called him at quarter-time) flew above the pack in defence in the second quarter and took a top mark in front of his mates lining the boundary. If you’re going to have a name like Shagger and a mop of dreadlock hair tied back you want to make sure you’re noticed for your skills as well. 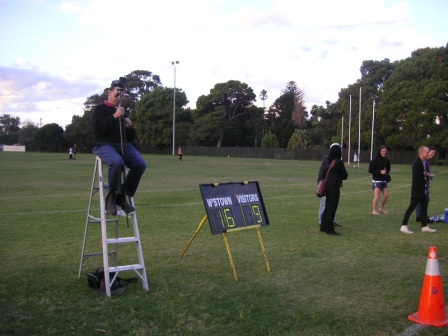 Fearon Reserve is also home to the thriving Williamstown Lacrosse Club, the home of many Australian representatives. In the score above Williamstown’s senior men’s has just completed a strong win over local rivals Footscray. 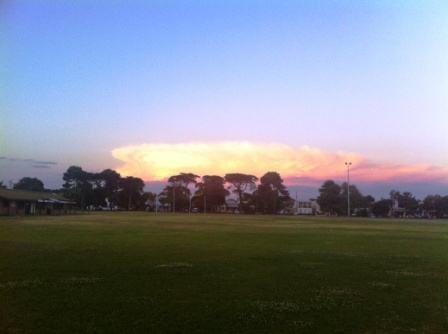 A sports ground can have different moods. The above two photos were taken by Rodger Young, a regular visitor to the Fearon, particularly for the Sunday morning kick-to-kick sessions.