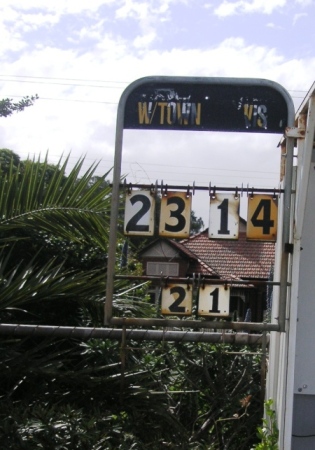 There are three generations of scoreboards at the Williamstown Bowling Club: there are the  metallic ‘flip-over’ scoreboards from about 40 years ago…

…and then there are the more modern plastic-wheel scoreboards, installed about 15 years ago.

The Williamstown Bowling Club is one of the oldest bowling clubs in Victoria.  It was founded at the Williamstown Mechanics Institute on the 9th June 1880, a month before the Victorian Bowling Association was established.

Williamstown’s first club match was at Carlton in February 1881. The players ‘removed their coats, but not their hats, and put on slippers’.

The club formed a three rink green on land adjoining the Mechanics Institute and erected its first pavilion in 1883.

In 1888 a new green of eight rinks and a two room veranda pavilion was opened in its present location in what is now Dennis Reserve (named after former member Jack Dennis).

Over the years the clubhouse had various alterations and extensions and was eventually demolished and the present clubhouse was opened in 1991. 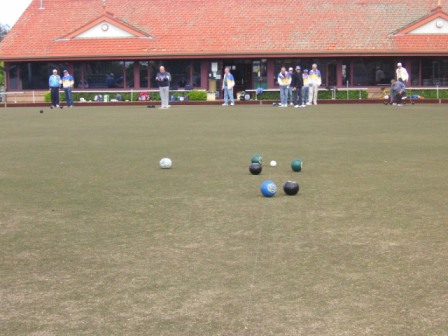 The club’s membership was ‘exclusively male, over 21 years of age, until reduced to 18 years in 1978,’ notes a 1980 history of the club. ‘Ladies were never welcome on the premises except on the [annual]  hilarious Saturday afternoon opening ceremony. But in 1921 the Williamstown Ladies Bowling Club was formed, and ladies were given limited use of our green until formation of their own green and erection of their club-house [in 1931]. The relationship between the neighbouring clubs has been extremely harmonious ever since.’