Research and photos by Wayde Petersen

In 1952 Carlton played Hawthorn at Euroa’s Memorial Oval, in an official VFL game (part of a Propaganda Round).  Carlton 17.15.117 def Hawthorn 11.14.80. About 5000 people attended, a great crowd considering the town’s population didn’t register 1000 back then. (It still doesn’t reach the 2000 mark even now). I think the scoreboard from that time is still standing, though boarded up. 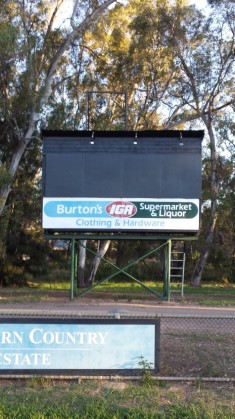 The Magpies were formed in 1880 and  have been part of the Goulburn Valley Football League since 1970, when they won the flag in their first GVFL season. Since then they have only added another senior title, in 1990, to the trophy cabinet.

Euroa’s ground is nestled alongside  Seven Creek, and it’s one of the prettiest places to watch a game of football.

Carlton v Hawthorn at Euroa on YouTube (about three mintes in).