Everything is at arm’s length inside the late 1960s scoreboard at Hansen Reserve, Airport West: the old black and white numbers, the newish computer, the timekeeper clocks, the timesheets, the siren, the old bell, the spare footballs. 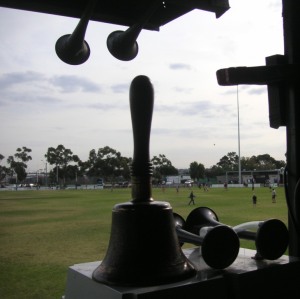 Maureen Murphy has been timekeeper and scoreboard attendant for the green and white Eagles for nigh on 20 years. Three games every home game. That’s a lot of games, a lot of time tending to numbers: goals, points, behinds, seconds, minutes, time-on…

When the club acquired an electronic scoreboard three seasons ago, courtesy of the City of Moonee Valley, Maureen found herself in charge of that too.

When Scoreboard Pressure visited for the Eagles’  game against Keilor, Maureen had David for company.  “We’ got a good system going here,  David and I,” Maureen said, in-between watching for signals from field, boundary and  goal umpires.

“And we’ve got an uninterrupted view of the ground, of course. In good weather. If the rain’s coming in we close up the scoreboard as much as possible and peek out from beside the siren.” 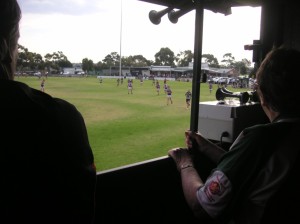 Scoreboard Pressure was curious to see that the goal umpires wave the all-clear facing the electronic scoreboard, rather than facing Maureen. “It surprised me at first when they started doing that. But at least they ask  now, about which way to wave. It doesn’t worry me.” 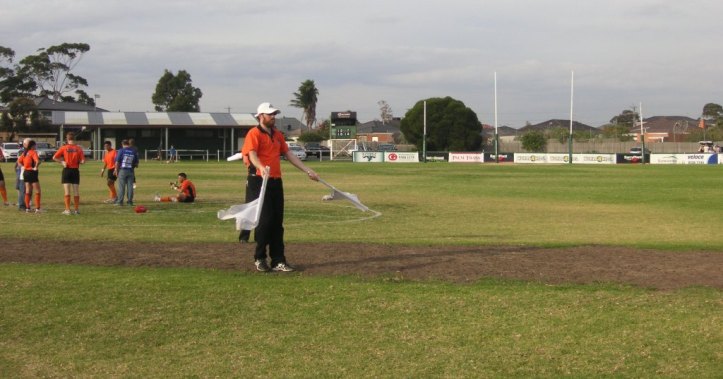 Maureen’s elevated office has, she says, “all the mod cons”. These include a little electric fan heater and quality carpet from the Murphy home. It’s probably the only scoreboard in Australia with Axminster flooring. 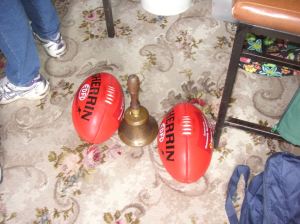 As well as her dedication to the Eagles, Maureen is timekeeper with the Williamstown FIDA Seagulls. It’s a club for players with intellectual disabilities,  where her son Corey plays in the seniors, usually  on the forward line. (Corey, 37, often gets a run with the Eagles reserves too.)

Football is very much in the Murphy family. Daughter Jacqui is the orange-girl and scoreboard attendant for for the Seagulls, and husband Jim is a stalwart of both clubs. (At the end of the Airport West v Keilor game, it was Jim who walked across the ground in the fading light to turn off  and lock up the electronic scoreboard.) Maureen is a life member of both the Airport West Football Club and FIDA (the Football Integration Development Association). 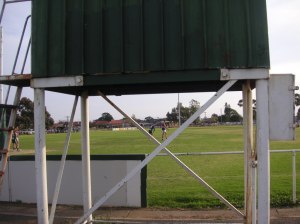 Airport West play in  A grade in the Essendon & District Football League, on  Woi-wurrung land. The club was formed in 1961. Hansen Reserve, which has two ovals,  was once part of  a sheep station run by the Sedderley family.