This was my third visit to see the Collie scoreboard. The first in 2015 was, as it turned out, for a junior game and the board wasn’t in use. I also dropped in mid-week in September 2019 and clambered over the blank board.

It was two days for the price of one at Collie Recreation Reserve on my latest visit. For a while it was pouring with rain as I sheltered with the Augusta Margaret River league players to watch the Collie Eagles reserves run amok. Then suddenly it was all blue skies. 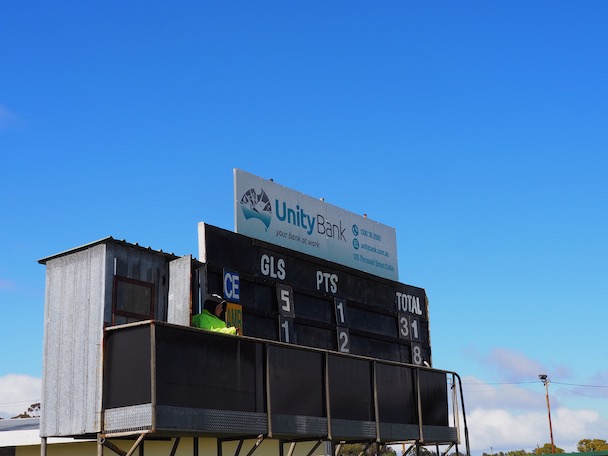 The young scoreboard attendant was dressed for the worst of weather and battled on efficiently happy to be able to step out of the weather when not re-arranging the number plates.

Footy has been part of the coal mining town for a long time. The Collie Football Association began in 1908 and for many years there were two Collie teams in the South West Football League. In 2002 Mines Rovers and Collie merged to become the current club Collie Eagles.

The best player to come out of Collie? Some may suggest Claremont’s 1964 premiership rover Les Mumme who played 202 games for the Tigers, won the fairest and best award in 1957 and was twice named All-Australia. Another Collie great made his name in a less conventional way. Bob Snell played 20-odd games for East Perth before seeking a clearance to West Adelaide. As was the way in those days he was forced to wait for two years before that idea came to fruition. Snell played in a premiership team for the Bloods in his first season in 1927 and won the Magarey Medal in 1929.

My favourite player from Collie was Aaron Marley who showed you can have a great modern footy career without playing in the AFL. Marley was best on ground when Mines Rovers won the SWFL premiership in 1997. In 1998 he went to East Perth in the WAFL and won the FD Book Medal as fairest and best for the Royals. Incredibly he then went home to Mines Rovers and won the Hayward Medal, the SWFL’s top individual award. The country boy went back to the city and was a vital part of East Perth’s premiership teams in 2000, 2001 and 2002 playing as an under-sized key defender. Marley capped off his career by captaining Collie Eagles to their only two premierships in 2004 and 2005.