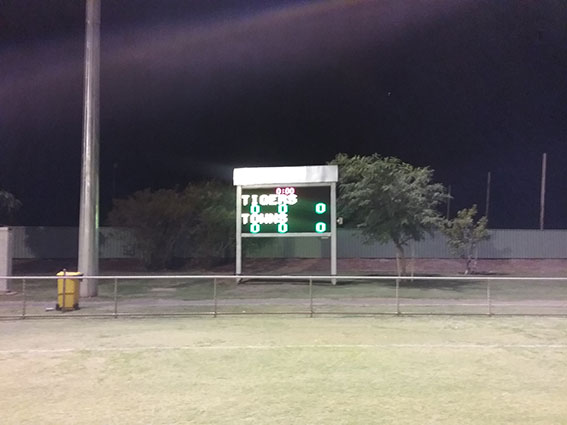 Clem Thompson Oval is located in the heart of Tom Price along Stadium Road. At first glance, the ground looked very small and when standing on the field of play, it became quite apparent that the distance from goal to goal was barely 130 metres. I also found out that the ground was as much as 20 metres longer in the past, before ground renovations were undertaken to its present configuration. You can still see the old ground on Google Maps, as they haven’t updated the town map since February 2010!

The oval runs north-south, with a new electronic scoreboard on the eastern (outer) side, with the nearby hills in the background. On the Stadium Road side, there is a new community facility, incorporating change rooms, canteen, a grandstand that seats approximately 200 people and also an upstairs function room. 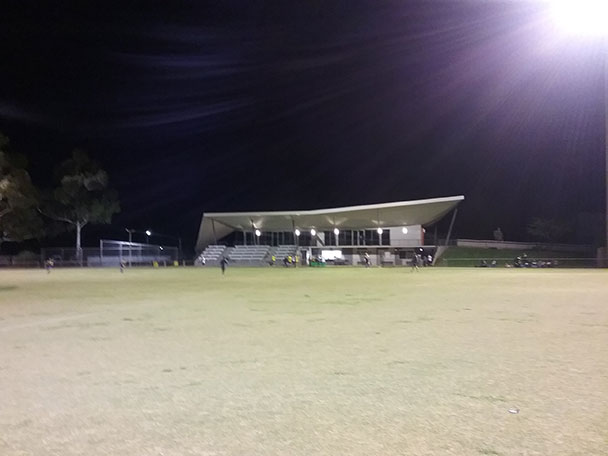 Australian Rules football commenced in Tom Price with a social game between workers in the Pit (mine area) and the Crushing & Screening area either late in 1969 or early 1970. Following the success of that match, an informal meeting was held to determine the feasibility of a competition. Further meetings were held and the Fortescue National Football Association was formed.

The teams related to the areas where the miners worked – Hill comprised of players who worked in the pit area, the Crushers came from crushing & screening and rail operations, Centrals from the mine administration, workshop and supply areas, and Towns were employees from the town, such as town services staff, banks, post office, catering, airlines and retail establishments.

in the competition, which commenced in 1970.

Only one game could be played each week due to the oval, which by now had a beautiful covering of grass, being shared with teams from other sporting codes. Therefore, each team played a game every two weeks. Two sets of guernseys were purchased by Max Tredrea for use in matches, one being gold with blue trimmings and the other blue with gold trimmings. The Hill Club purchased a set of West Perth guernseys later that season.

Towns who went through the 1970 season undefeated, only to lose narrowly to Hill in the grand final.

The re-opening of Hamersley Irons’ Paraburdoo operations in 1973 saw a team formed in the town – Saints – and enter the competition. They were premiers in their first year and then again in 1976 after being runners-up in 1974 to Centrals. Another Paraburdoo team, Demons, entered the competition in 1974 raising the number of clubs to six.

Since its introduction into the region, Australian Rules football has broken down divisions that had emanated in the workplace and many new friendships were created across the working environment in the region. Passion generated from the introduction of football brought the towns to life once the season started creating a healthy rivalry.

There have been seven different clubs with eight names since 1970, with Towns the only original club  to keep the same name over the years. Crushers (1970-82) became Tigers in 1983 and the other original clubs, Centrals and Hill, merged after the 1994 season to become Panthers. Two Paraburdoo-based sides have played in the FNFL – Saints (1973 to date) and Demons (1974-92). The premiership tallies are as follows: Towns 17, Tigers 11 (none as Crushers), Centrals and Saints both six, Panthers three, Hill two and Demons one.

The Fortescue league was possibly the first league in Australia, to introduce the four-man bench and interchange back in 1978 in order to give two extra players a game and also to take into account the temperatures that matches were played under.

The competition now has four teams competing; these being Towns, Tigers, Panthers and Saints. Hill and Centrals merged to form Panthers in 1995 and Demons disbanded prior to the 1993 season.

Lights were installed on the Paraburdoo oval in 1990 and soon after at Tom Price, enabling night games to be played.

In the 2011 season forward Simon Ponter, playing for Paraburdoo, set a new all-time league record, kicking 106 goals in 11 matches. He became the first player in league history to kick 100 goals in a season. He kicked 18 goals in a single game against the Tom Price Tigers in June 2011.

Unlike the neighbouring Newman League, the FNFL still runs with 18 players a side on the field.