Geoff Marsh watched his sons bat. He didn’t need to worry for long. The east screen.

Interstate and overseas readers may be aware that WA has a new stadium. It’s been given a corporate naming rights name we won’t be using on this site. The new L-plate state government has made some poor decisions in recent times, some have been overturned. The stadium name saddened me. I thought it was undignified, shortsighted and made no financial sense. 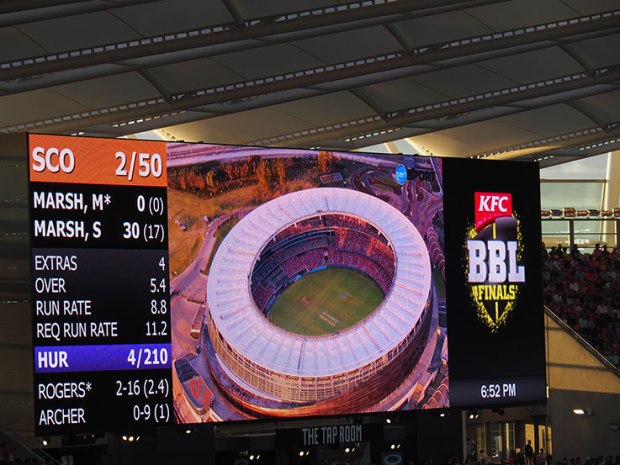 Have you seen our new stadium. The west screen.

Scoreboards at modern stadiums aren’t scoreboards they’re video screens. At Perth Stadium they’re 340sqm “super screens”. At the cricket match I attended it was clear the super old scoreboard at the WACA gives far more information, like details of the batsmen dismissed and even, by way a light bulb, the name of the player who’s completed the latest bit of fielding. The screens are very good for watching replays.

In these early days there’s a certain fear attached to attending events at Perth Stadium – despite the brand new Perth Stadium Station and lots of bus bays, attendees have real concerns about getting home. We live in hope that our public transport experts will get it worked out. I took the easy way out and took off when Ashton Turner was run out and the Perth Scorchers had no hope of reaching Hobart’s huge total.

Plenty of fans left early and outside there lots of stadium staff offering help. “We hope you enjoyed your Stadium experience,” said a bloke with a megaphone. Well, did I? 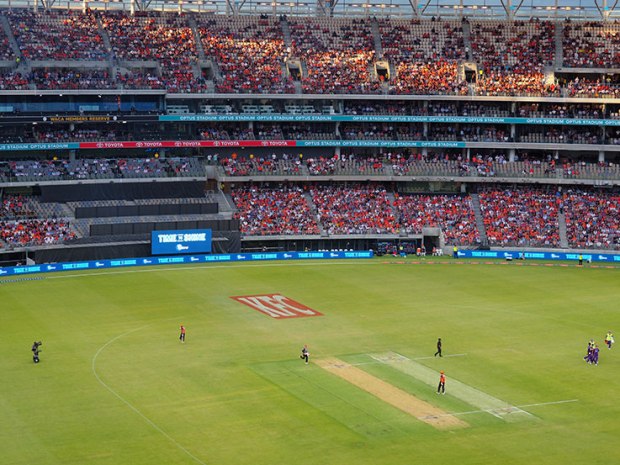 I was in level five, right up the top. The view was spectacular. But I was in row of drinkers and comers and goers. While the leg room is fine you still need to stand or twist to let people through. I think this might be because of drink holders attached to back of seats. So someone shuffling off to buy their four mid-strength beers or bucket of chips needs to negotiate the legs of seated patrons on one side and drink holders on the other. My experience was a bit extreme. At one point, before the game even started, a woman seated behind tapped me on the shoulder and said,” You must feel like a revolving door.”

The food being carried back to seats looked like crap but the public areas are comfortable and command some amazing views. I was there for a Big Bash game so it was an unusual experience – noise reduction headphones are a necessity and, yes, I took mine.