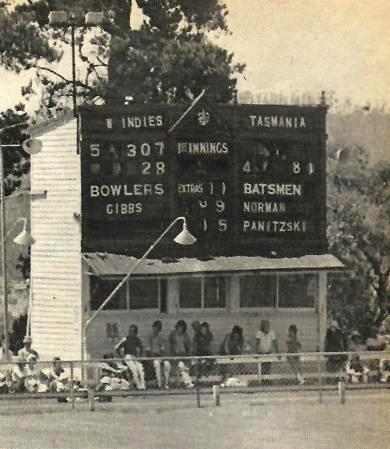 Photo supplied by Michael Turner, who wrote to us, saying:

Found an old March 1976 copy of Australian Cricket the other day, which included the attached – taken at the TCA Ground during the West Indies tour in January 1976.

Thanks Michael. What a treat!

A City Of Hobart website  states: The TCA Ground playing area is nearing completion of extensive works to improve the playing surface, drainage and irrigation. A new scoreboard is also set to be installed shortly.

Ric Finlay, writing for ESPNCricInfo some time ago, states: The press, originally accommodated under the old scoreboard (which was built in 1907), were relocated on the top deck of the stand in 1977, the year of Tasmania’s admission to the Sheffield Shield.

A brief history of the ground by Austadiums does not refer to the scoreboard but AC/DC, greyhound racing, World Series cricket and the 1978/79 Gillette Cup all get a mention.