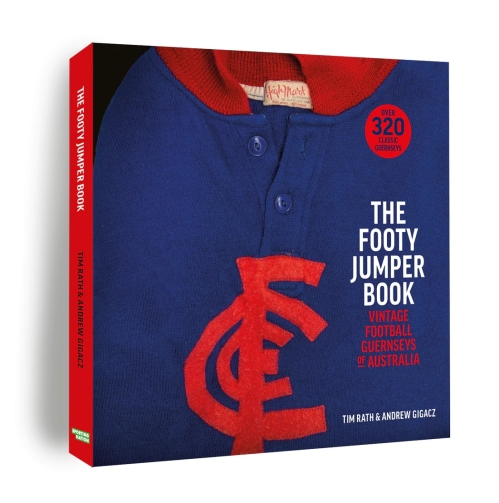 The Footy Jumper Book, by Tim Rath and Andrew Gigacz, has just been published by Sporting Nation.

The hardback book features 320 vintage Australian Rules jumpers, from the 1890s to the early 2000s.

I was lucky enough to have a jumper of mine selected for inclusion. It appears in a section called Tricks of the Trade, about how footy clubs would cut corners to maintain the longevity of a jumper. In my case, the jumper had two numbers: 31 and, underneath it, 4.

The jumper belonged to my father, though he was not a footballer. It was worn by his mate Bill when he played in a local league, for Geelong West Sporting Club, more than 60 years ago. When Bill died, about 30 years ago, Bill’s widow gave it to Dad. When Dad died, in 2000, I found it in his wardrobe.  I then contacted Rita, who gave me permission to become the jumper’s custodian.

When author and photographer Tim Rath visited to take photos of the jumper earlier this year I offered to give him a hand with the book, thinking that maybe I could assist with some proofreading just before he was ready to send the book to the printers.

Tim brought me into the project a little earlier than I anticipated. He and fellow guernsey guru Gigs (nobody calls Mr Gigacz Andrew) allowed me into their inner sanctum of footy jumper knowledge and enthusiasm several months before the proofreading stage. (You could say that I thought I’d be coming off the bench deep into the last quarter, just before time-on, but I was on the ground not long after the three-quarter-time orange peels had been cleared away.)

I became the third point-of-view (or the third-wheel!), chipping in mainly with suggestions about the content and the style guide. It’s a tricky role: you don’t want to undo a lot of the work already done, and you don’t want to create too much more work, especially as deadlines loom, and expenses increase.

It’s a matter of trust and a matter of knowing you’re going to win some arguments and lose others. Every question, every answer, every Zoom meeting, every phonecall, every one of the dozens and dozens of emails must come down to “What’s best for the book?”.

And now the book is out in the big wide world. I’m a little biased (just a fraction) but it scrubs up pretty well. Lots of yarns (so to speak) about jumpers and players, and clubs and leagues. Plenty of nostalgia, and just enough technical info too.

As fate would have it, Rita, widow of the man who wore my jumper more than half a century ago, passed away in the first week of November, 90 years young, just as Tim, Gigs and I had agreed on the final proof.

I considered wearing the jumper to Rita’s funeral, or even just taking it with me. Instead, I spoke to a relative who was happy for me to continue looking after a footy jumper that is now in the company of more than 300 classic vintage guernseys.

Note 1: The book also includes a bonus page of photos of scoreboard numbers!

Note 2: The following photos do not appear in the book. The triptych, though, was my calling card to jumper junkie Tim Rath. 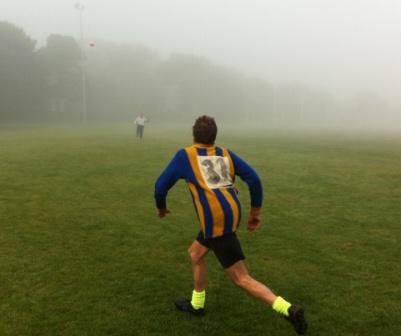