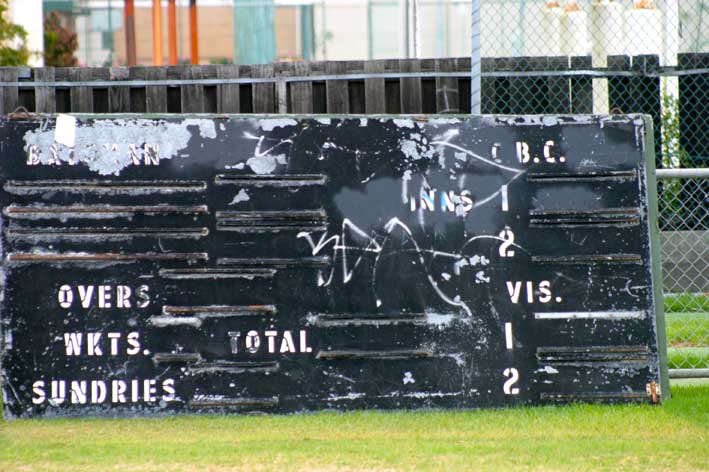 by LES EVERETT
The scoreboard at Fremantle Park looks a bit sad these days. It’s leaning against the bowling club fence and although cricket matches are still played on the park’s two pitches the scoreboard is no longer used.

The ground has a long history. In 1887 the Union Football Club moved to Fremantle Park and won a hat-trick of premierships before changing their name to Fremantle.

In more recent times CBC Cricket Club played at Fremantle Park and enjoyed great success under captain Ken Judge. The Attadale Bicton Cricket Club uses Fremantle Park for some of its lower grade games now and in the winter you can catch school games of Australian Rules and Rugby Union. It’s also used for pick-up soccer games and some real games with referees too.

Fremantle Park is the venue for the West Coast Blues ‘n’ Roots Festival that in recent times has featured Bob Dylan, Elvis Costello, Richmond fan Dan Sultan and in 2012 will be headlined by John Fogerty.

Add countless dog walkers, joggers, boot campers and others to the mix and it’s clear Fremantle Park sees plenty of action – it’s just no longer recorded on the old scoreboard.