Since Olympic Park is no longer going to be a football ground its early electric scoreboard will be no more.  This photograph is  of Jim McLean, Gold Medallist in the Victorian State League in 1984 with one of the most ubiquitous figures in the local game, Joe Docherty, when the Offside Club held a function at the ground. The Offside Club drew together players, officials and administrators of the game for convivial occasions and to raise money to support worthwhile causes.

This photo was taken by Roy Hay during the European championships in 1988. “The charm offensive by the police had little effect on the troublemakers among the English fans,” recalled Roy, “and there was great relief when they bowed out in the group stage losing to the Republic of Ireland, Holland and the Soviet Union. These shots were taken just before the match with the Soviet Union which won by three goals to one.” 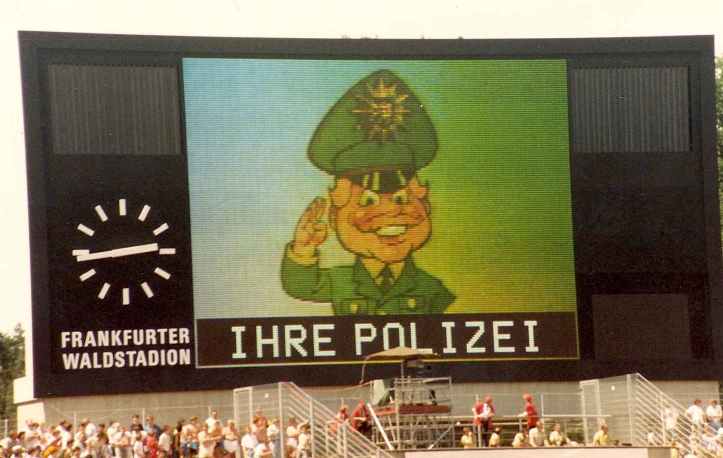 These posts are our first football (soccer) scoreboard for Scoreboard Pressure and are courtesy of football historian Roy Hay and Goal Weekly. Roy is a member of the Australian Society of Sports History, and director of  Sports and Editorial Services Australia. He writes a weekly column called Blast from the Past for Goal Weekly, where these, and other, scoreboard yarns were first published, in November 2011.