Jeff Lawton, a regular contributor to Scoreboard Pressure, took this photo back in 1994. He noted that 1994 was the last year for both Prahran (the Two Blues) and Oakleigh (the Devils).

The late, great Jim Stynes played for Prahran in the latter-half of 1986. His first game was against Oakleigh.

The Age’s Peter Hanlon reported shortly after Stynes’ death in March: ‘It was mid-winter 1986 and the Irish project player was struggling – playing off the bench in the Demons’ reserves, sometimes missing a game altogether. If he was going to develop it was reasoned he had to be playing: Prahran, captain-coached by 10-year Melbourne veteran Greg Hutchison, was the last-chance saloon.’

Stynes played 12 games for Prahran that year, and was runner up to Greg Hutchison in the club’s best and fairest.

Toorak Park was officially opened back in 1893 and is now home to amateurs footy teams Old Xaverians  and Prahran Assumption, and Prahran Cricket Club.

The current scoreboard was built in 1971 and hasn’t changed much over the years, save for sponsors and numbering.   Twelve months ago I could see that the board now has those rubber-elastic digital numbers rather than numbers on rolls or tin sheets. 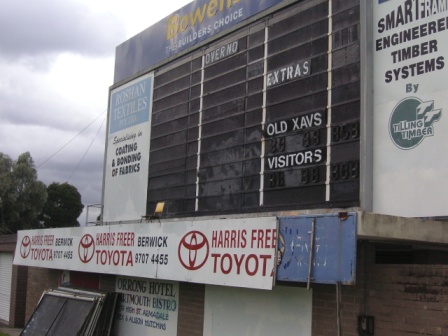 To learn more of Jim Stynes’ time at Prahran read:

True blue to the Two Blues as a young ruckman earns his stripes (The Age, 21 March 2012)