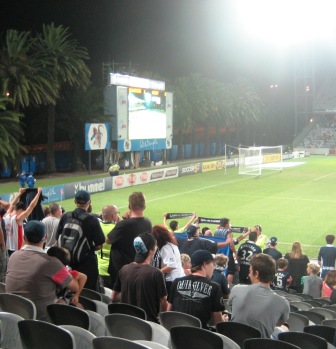 These two photos were taken by Victor Fisher earlier this year at the home ground of Central Coast Mariners, a strong team in the A-League, Australia’s premier football/soccer competition. The Mariners finished the 2011-2012 on top of the table which, in many other soccer competitions, would have meant a fair bit of silverware and bragging rights as the best team in the land. However, they were knocked out during the finals series, with their northern neighbours Brisbane Roar winning the A-League championship for the second year running.

Bluetongue Stadium’s website notes: ‘Formally known as Grahame Park in the late 1990’s, the construction of Bluetongue Stadium was completed in February 2000, bringing a one of a kind multifunctional facility to Gosford’s foreshore.

‘Bluetongue Stadium has played host too many events including, International Rugby Union, National Rugby League and National A-League Football matches, branching out to boxing, motor cross and open-air rock concerts as well as a multitude of local sporting and community events.’

Photographer and writer Carmel Riordan took this photo in March, in-between watching her son playing in a cricket final in the outer western suburb of Melton. “The team lost unfortunately, but I loved the ‘bloods’ wording.”

Carmel is also an accomplished writer of short fiction, drama and personal narratives.

Rockbank is on the Ballarat highway, not far from Melton. I liked the graffiti on the back of the scoreboard: it seemed to suggest some sort of civic pride. Rockbank play in the Riddell league against the likes of Romsey, Broadford, Kilmore, Diggers Rest and others.