The iconic Adelaide Oval wouldn’t be the same without its century old scoreboard. It is the easiest scoreboard to understand in the nation. The minute you walk into the ground and look at the old girl, you get an immediate understanding of the state of play in the match in the middle.

Each of the scoreboard images in this yarn have their own story.

Above: For long suffering Redbacks fans the 2010-11 Big Bash was a first success at any level in a long time, beating NSW in the final. This panoramic image captures the best of Adelaide Oval, integrating the old and the new. Naturally, with current renovations, the ground will never be seen the same way again.

The photo above is from the first day’s play of Australia v South Africa, Thursday 22 November 2012, when Michael Clarke, David Warner and Mike Hussey feasted on the South African ‘attack’.  It was, indeed, a run glut.

The immediate photos above and below are from the amazing tie in the 2012 Ryobi Cup one-day final between the Redbacks and Tasmania. The photo above shows South Australian opener Daniel Harris’ contribution to a century opening stand. I write a column for a country weekly paper on the Yorke Peninsula and Harris is from the village of Yorketown. 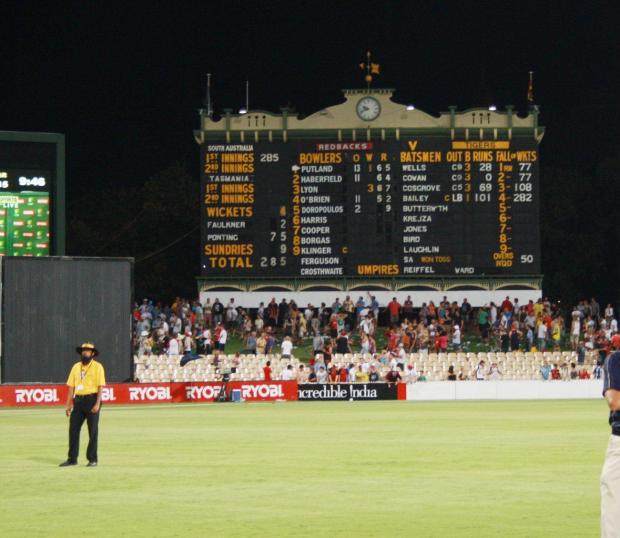 The final score of the tied one-day final. Ricky Ponting was at the non-striker’s end for the final ball. He took his pads off to be able to run as quickly as possible.

The 2011 Adelaide Oval Test between Australia and India were the last Tests in Australia for VVS Laxman and Rahul Dravid and, presumably, Sachin Tendulkar . Despite this, the giant screen adjacent to the scoreboard had, at the end of the Test, highlights of Michael Clarke celebrating his double century. 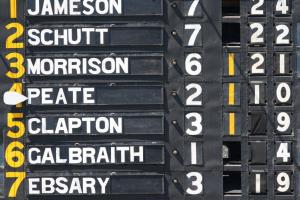 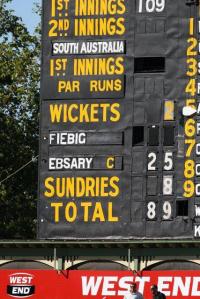 These three photos are from a women’s match between South Australia and New South Wales.

Rhianna Peate (top photo) hails from Mount Gambier. This was her first game at Adelaide Oval.

The two batters (middle photo) Cara Fiebig and Lauren Ebsary are two rural cricketers from the mid north of SA. Ebsary is from Barunga West and Fiebig now teaches in Port Pirie.

In a recent one-day Ryobi Cup game young tyro Kane Richardson changed the course of a match with one devastating spell. He would go on to take 6/48, but the scoreboard at this time was just after his game changing spell.

Richardson is from the rural town of Eudunda, and this photo was a part of a back page feature story on the athletic quick in the Mid North Broadcaster.

Darren Lehmann’s final first class innings was a treat. What is etched in my mind was that after he got to 100, Lehmann just slogged the next 67 runs, like he was having a hit of back yard cricket.

On reflection, it’s also interesting to note the well-travelled players in this game. The Redbacks had Ryan Harris (who later went to Queensland) Graham Manou (Melbourne Renegades), Mark Cosgrove (Tasmania) in their side, along with import Matthew Elliott (Victoria and Australia), one Test cricketer Dan Cullen and Yorkshire coach (and former South Australian Test bowler) Jason Gillespie.

The Western Australian lads Theo Doropoulos and Ben Edmondson would also come to South Australia to try their luck.

This snap was taken during the last Ashes series, when Kevin Pietersen hammered the Aussies into submission. I captured this shot, which also displayed Pietersen’s highest score in Test cricket so far, of the scoreboard attendant sticking a foot out of the scoreboard, in an effort to get comfortable.

Peter Argent is a widely published freelance photojournalist. He writes and photographs for several South Australian publications, including a weekly column for the Yorke Peninsula Country Times. Peter is a regular contributor to the Koori Mail, The Footy Almanac, the AFL Record, Inside Football, and the SA Football Budget.