Ungarie is a southern NSW town with a population of a few hundred. The football and netball club plays in the Northern Riverina League. Its scoreboard, circa 2000, records the Magpies’ early lead in a game against Girral-West Wyalong. The home team, captain-coached by Chris Daniher, team won by  179 points.

The photo is from Paul Daffey’s 2001 book Local Rites, A year in grass roots football in Victoria and beyond. Chapter 15 of the book, Land of the Danihers, details a weekend spent in Ungarie.

‘The football ground was on the other side of Humbug Creek. I dipped the 1985 Fairmont down the floodway and found the oval, which firmly belongs in the no-frills category. The rooms are concrete and boxy and the canteen is wrapped in corrugated iron. The grass is streaky and a sea of endless plains surrounds the ground. The sky was as endless as the plains. The Danihers come from wide open country…

‘In football circles, the Danihers’ home club could hardly be more famous if the Harbour Bridge ran over Humbug Creek. Ungarie secretary Lyn McGrane said her home town attracts curiosity in all parts south. “It happened when I went to buy a car in Albury. I mentioned Ungarie and the bloke went on and on and on about the Danihers. I said, ‘I’ll get you  an autograph if it’ll make the car any cheaper’.”

The Ungarie Football Club was formed in 1914 according to Paul and in 1916 according to the club’s Facebook page.

Jim Daniher, grandfather of the four Daniher boys who went on to play for Essendon from the late 1970s to the 1990s, was foundation president. His son, also named Jim, married Edna and they had eleven children, including Terry, Neale, Anthony and Chris.

Chris was still playing for Ungarie last year, at the tender age of 46. His brother Anthony wrote in The Sunday Age in August 2012:

‘After playing 124 games for Essendon over 11 seasons, Chris headed back to our family farm in late 1997. After a couple of years in the Riverina league with Temora, he completed a full-circle by pulling on the boots for Ungarie again. In his first couple of years back there, the local footy club was firing. Under Chris’ leadership, the mighty Magpies won premierships in 2000 and 2001. He won the league best and fairest in both those years.

‘People like Chris love crossing the white line and having a contest. They love to come up against the young bucks from the next town and teach them a trick or two.

‘I think Chris has held just about every coaching and committee position possible at the Ungarie footy club in the past decade. One year he was president, assistant-coach of the seniors, coach of the under-14s and ran the Auskick clinics. At the end of that season his wife Charlene said, ”Enough’s enough. You just can’t keep doing all this.” So Chris gave up the presidency, then took on the job as senior coach!’ 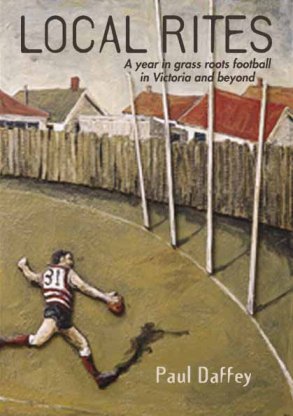