The scoreboard at the Morwell ground, home of the Tigers, has seen plenty of footy over the past 50 or 60 years. The elements, especially rust, have taken their toll and it looks like next year the scoreboard will be digital/electronic/free of rust.

When Scoreboard Pressure visited for an elimination final between Wonthaggi and Sale, Russell was looking after the scores. He has the comparative luxury of the old timekeepers’ room: carpet, little heater, radio, ashtray. “And the best view of the game.”

The room also has plenty of  white-on-black names on long, rectangular boards: local clubs, AFL teams, Melbourne district cricket teams (“We’ve hosted a few Twenty/20s here.”). What caught our eye, though, were the black-on-white umpires’ names. “We used to hang them up, above the team names, but the hooks have rusted too much,” explained Russell. “And we need that space now to put up our portable digital clock, now that the old clock’s not working. No-one seems to know how to get it going again.” 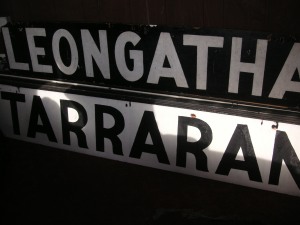 Russell had to be on his toes for the elimination final. Wonthaggi, the favourites, held sway for the first half but  Sale, the Magpies, made their move in the third quarter. They hit the front half-way through the last, only for the Power to edge five points in front and hang on.  The Magpies last three scoring shots were points, including a banana-bender that grazed the far goal post. “Young side, Sale. They’re going to play plenty of finals over the next few years.”

Morwell is a strong Gippsland club, its most recent flags being in 2013 and 2014. This year they just fell short of finals action. Past players include Richmond’s Graeme Donaldson, Geelong’s Ray Card and Bruce Williams and Vin Waite of Carlton.