Words and photos by Derek Mott

The newer scoreboard on the balcony of the pavilion opens up like a door and each panel is attached to the balcony. The older scoreboard (probably the original one from the 1980s) sits on the half forward line facing away from the pavilion. It looks like it has done its fair share of service over the years.

The Whitford Amateur Football Club was formed in 1976 started in F Grade in the WA Amateur Football League, before reaching B Grade in 1984. The Warriors (originally they were the Gulls) initially played at Otago Reserve in Craigie before moving to their current home at MacDonald Reserve in the early 1980s. 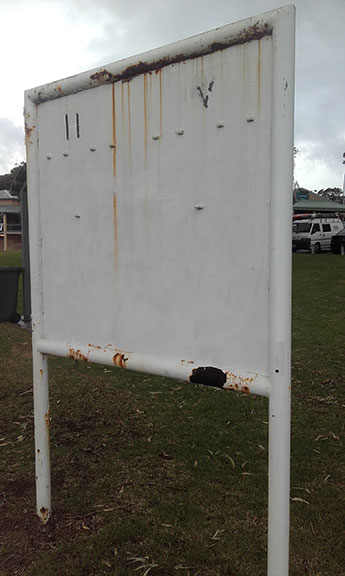 The Warriors have spent the past 25 years in the top two grades, including seven seasons in A Grade between 2008 and 2014. The club has won 15 premierships, including their B Grade win in 1992, when they defeated Bassendean by 54 points.

In recent seasons, Whitford has suffered somewhat of a slide. In 2012, they finished the home-and-away season in fifth spot with 10 wins under new coach Adam McMahon before dropping one place to sixth the following season with seven wins and a draw. The Warriors’ seven-season stay in A Grade came to an end in 2014 under Brendan Parker when they finished ninth with just four wins. Last season, Dylan Eifler was handed the reins and Whitford finished in sixth spot, missing out on the finals despite having a 10-8 record.