There’s not much at Nukarni these days. The footy club still exists but is based in nearby Merredin.

The Demons played on the gravel until 1980 and in the 1950s and 1960s Nukarni was one of the most successful country clubs in WA. Nukarni won five Merredin Football League premierships in a row from 1951 to 1955. In 1960 Nukarni became one of the foundation clubs in the Eastern Districts Football League and made a habit of playing in grand finals with premierships in 1961,1962, 1963, 1966 and 1968.

Thanks to Holly Crook for this photo from the late 1970s that shows players from Nukarni and Burracoppin after playing on the gravel. That’s Holly in the foreground leading her dad Max off the ground.

John Crook was probably Nukarni’s greatest footy product. He played 42 games for South Fremantle and five for WA in 1950-51. Crook was a premiership player for the Bulldogs in 1950 and a star in the grand final. One weekend in May 1950 Crook played for South Fremantle on the Saturday and on Sunday made 239 for Nukarni in the grand final of the Merredin Cricket Association. Sick of the constant travel he decided to stay home in 1952. His brothers Paddy and Joe were also very good players for the Demons.

The old footy ground is overgrown and fenced off but the scoreboard stands proud – a powerful structure if ever there was one. 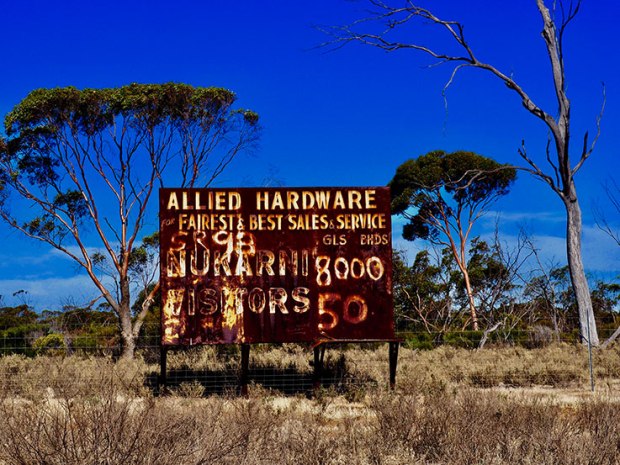