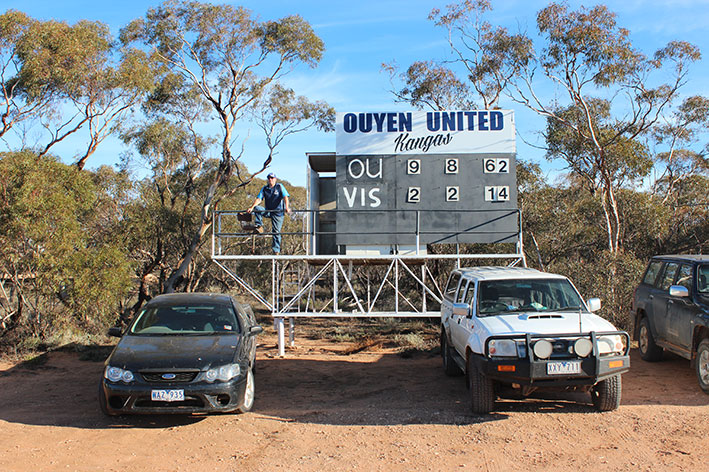 Underbool is a town about 550 kilometres north-west of Melbourne, on the road from Ouyen, the major town in the heart of Victoria’s Mallee region, to Adelaide. For many years, Underbool was part of the Walpeup-Underbool Football Club, which played home matches at the grounds of both towns.

At the end of the 2015 season, Walpeup-Underbool was left stranded when the Mallee league was disbanded and the various clubs were moved into southern competitions. Except in the case of Woomelang-Lascelles, which was wound up altogether.

The Walpeup-Underbool Football Club was based too far north to enter a competition to its south like the North Central league or the Horsham and District league. And it was not nearly big enough to move into its competition to the north, the strong Sunraysia league, which is based in Mildura.

It was therefore forced to merge with the only remaining club in its region, Ouyen United, and the merged club took the major step of entering the Sunraysia league.

One of Walpeup-Underbool’s conditions of agreeing to the merger was that three home games a year would be played at Underbool. The remaining six home games could then be played at the club’s base, at Blackburn Park in Ouyen. For games against rival clubs, supporters from Underbool would have to travel 50 kilometres east to Ouyen and then 100 kilometres north from Ouyen  to Mildura.

One of the advantages of being regarded as a club’s second base is that the ground is unlikely to receive funding for an electronic scoreboard. And so it was last Saturday that Ouyen United played one of their three home games at their second base, in Underbool, and the score was denoted by tin numbers on a tin scoreboard.

The scoreboard attendant was Greg Vallance, a member of one of the great footy families of the region. Greg had a busy day updating Ouyen United’s advancing score against Merbein, the club struggling at the bottom of the Sunraysia league ladder. This photo was taken halfway through the second quarter of the senior game.

Greg enjoyed his day attending the scoreboard under the weak winter sun, with the familiar Mallee scrub at his back. It’s not a bad gig when you have to do it only three times a year.