A big storm hit Kalgoorlie-Boulder on 18 November 2017 and ripped the scoreboard at Sir Richard Moore Sports Centre to shreds.

The lack of permanent scoreboard didn’t stop supporters of Railways from having some fun after their upset win over Mines Rovers in the 2017 GFL grand final. The big game was played in Boulder but fans of the Panthers delighted in putting the score up at their home ground… and even when there wasn’t much of the scoreboard left the score kept appearing.

The oval is also the home of the Kalgoorlie City Football Club.

The Goldfields Football League started in 1896 and was seen as the equal to the competition in Perth and Fremantle until after WW1.

You could write a book about players from the GFL but for now it’s worth mentioning 1994 North Smith Medal winner Dean Kemp played for Railways and 2018 WAFL grand final Simpson Medallist Kyal Horsley was a Kalgoorlie player. 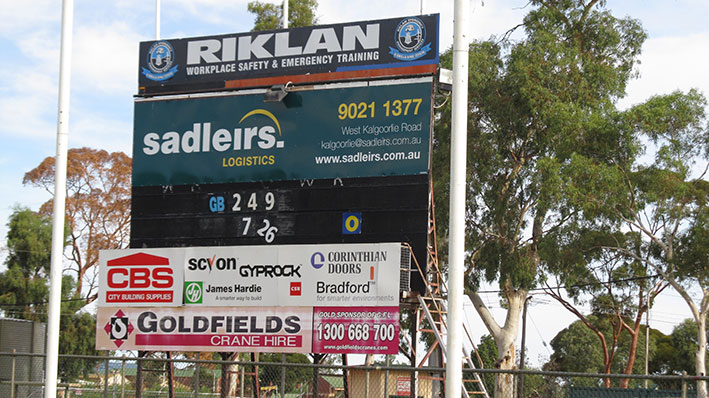 The cricket pitches were removed in 2017 ending a long association with the summer game. It had been the home ground of the Hannans, Great Boulder and North Kalgoorlie cricket clubs and hosted some famous visitors. Don Bradman, playing for South Australia, made 23 and 64 in a game against a Goldfields 11 in 1940; the West Indies played the WW Country 11 in 1968 with Roy Fredericks and Seymour Nurse scoring centuries while Viv Richards played in a World Series Cricket game at Kalgoorlie in 1978.