Port Fairy full-forward Bernie Baxter certainly kept scoreboard attendants  busy  in his heyday, so it made sense, in 2007,  to name the Port Fairy scoreboard after him.

Baxter, 83, was a key player in Port Fairy’s only senior Hampden Football Netball League premiership side in 1958. He booted 692 goals for the Seagulls in a career which began in 1952 and ended in 1963 when he played in the reserves premiership side…Baxter won the Hampden league goalkicking on three occasions. He booted 77 goals in 1953, 97 in 1956 and 87 in 1957.

Baxter came to Port Fairy after a short career with Carlton: 28 senior matches from 1949-’51. 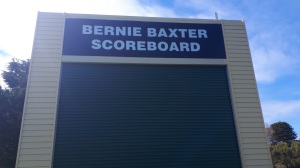 In the off-season the Bernie Baxter Scoreboard  – now electronic – may not look that interesting, with all the gadgetry and circuitry secured behind a roller-door. But it still pays tribute to a fine footballer and much-loved local identity. 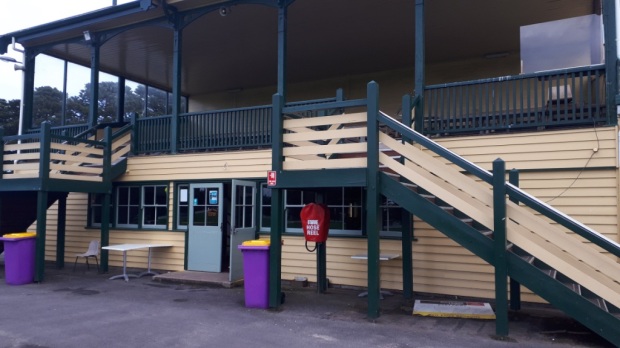 History of the Port Fairy Football Club, via Australian Football.

Thanks to Geoff van Wyngaarden for photos of grandstand, Seagull, and electronic scoreboard. Geoff is a keen Seagulls fan- Williamstown Seagulls! – and a life-long lover of footy grounds, cricket grounds, sport in general, and scoreboards.