This  photo is part of a new book, ‘When local footy mattered, Remembering the 1979 TFL Centenary Season’. Here at Scoreboard Pressure our eyes were drawn not just to the footy action but to the tantalising glimpses of the old North Hobart scoreboard. The book’s author Marcus Nichols explains: The photo above from the Grand Final, with Peter Hudson, has the North Melbourne/Collingwood  VFL Preliminary half time score and the North Launceston/Scottsdale NTFA Grand Final progress score.  North Launceston won by 2 points.

In the marking contest photo from Round 10, ‘NN 27’ is a progress score from the first quarter of the match at Boyer Oval, between New Norfolk and North Hobart.   ‘FI’ 20 was a 1st quarter progress score in the match between Fitzroy and Footscray at VFL Park, a match won by Fitzroy (119-74) and ME (Melbourne) played St Kilda at Moorabbin.  Melbourne won by 20 points (85-65).

Marcus’ book is a thorough game by game account of the 1979 season of the Tasmanian Football League, culminating in one of the state’s greatest Grand Finals. Hot favourites Glenorchy, with Peter Hudson having already kicked 173 goals for the year, were pipped in dramatic fashion by Clarence, led by captain-coach Noel Leary. Clarence 12.11 (83) defeated Glenorchy 11.14. (80). 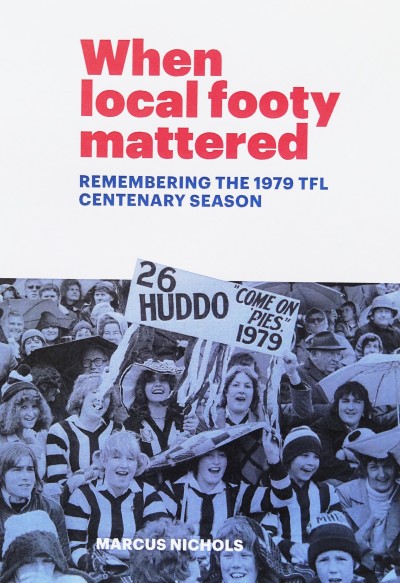 Many thanks to Marcus Nichols, The Mercury, and my Sunday morning kick-to-kick mate Rodger Young, who alerted me to the book. Rodger grew up in New Norfolk, close to Boyer Oval and the Hudson family, and sent this photo of one set of the ground’s goalposts, in honour of Peter Hudson, whose playing career began at New Norfolk. 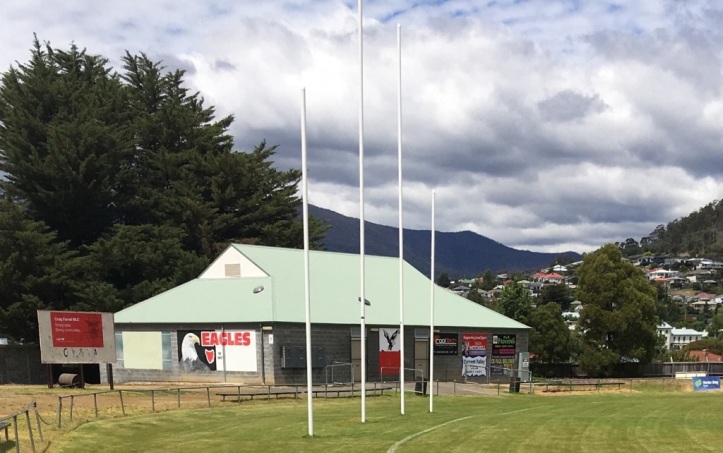