Our trek began at Matso’s Brewery and took us via the neat linear Japanese cemetary to Father McMahon Sports Field where all West Kimberley Football League games are now played. The oval is named in honour of Broome footy stalwart Father Michael McMahon who was, among other things, league president from 1973 to 1977 and again in 1979.

It was NAIDOC round with three game scheduled for Saturday 9 July at McMahon and one played the night before. We got there for the match between Peninsula Bombers and Broome Saints. The other teams in the WKFL are Bidyadanga Emus, Broome Bulls, Looma Eagles, Cable Beach, Derby Tigers and Towns. 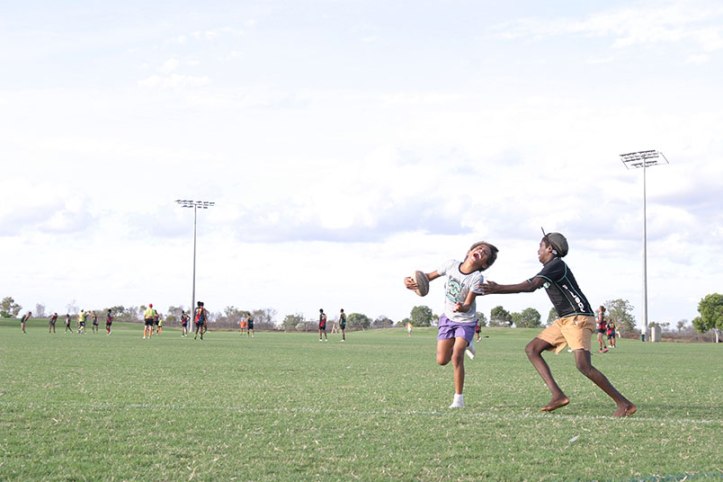 It was near perfect. Great Broome weather, excellent surface and changerooms, good footy, crowd full of advice, kids playing their own game behind the goals and watching sometimes, the best ice cream van I’ve ever encountered at a footy ground and the added bonus of planes taking off seemingly in the goal square at the other end of the ground. And yet as I wandered about camera in hand I realised my  worst footy nightmare  – no scoreboard.

I noticed players asking the goal umpire for updates from time to time and I took a photo of his scorecard during the last quarter. It was close, I knew that. The final siren sounded and players shook hands. No great celebrations and the game had been played in very good spirit.

Rugged up in cold Perth a few days later I read the West Kimberley FL results in The West Australian – Peninsula Bombers 13.9 (87) Saints 13.9 (87). That would have looked good in a photo of the scoreboard.

I’ll need to return to Broome when they get a scoreboard – hope it’s a manual one.