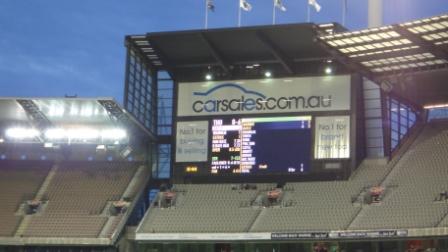 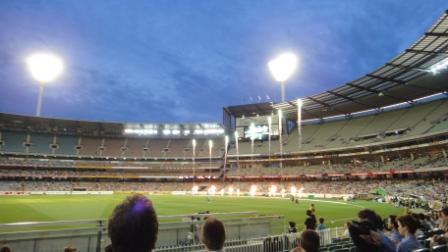 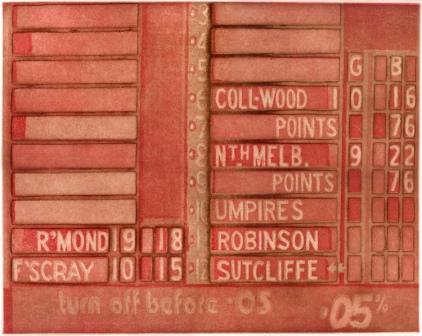 Thirty years ago a Melbourne sporting landmark was dismantled, packed up and packed off to Canberra. The 1907 MCG scoreboard at the city or western end of the ground had recorded Test matches, Grand Finals, early 20th century cycling events,  the 1956 Olympics,  and much more. It had also borne witness to visits from the Queen, the Pope and Christian crusader Billy Graham.

The secretary of the Melbourne Cricket Club at the time, Ian Johnson, told The Age in September 1981 that the decision to replace the manual scoreboard with a $4million electronic scoreboard had been taken “with a lot of sentimental regret. We did not do it happily.”

But the classic MCG scoreboard was not the ground’s first scoreboard, and it at least lives on – it was transplanted to Manuka Oval in 1982 and, now known as the Jack Fingleton Scoreboard, is still in use. 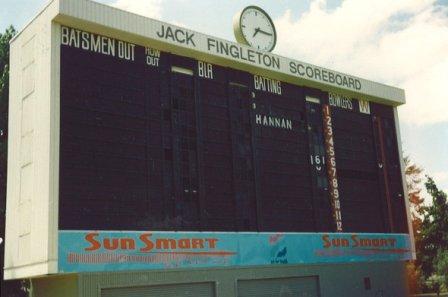 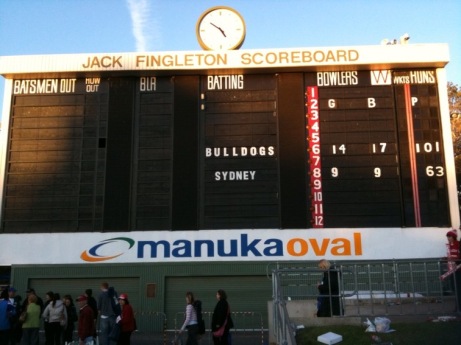 The MCG has had several scoreboards over the course of its 158 year history. Up until 1874, according to the Melbourne Cricket Club, small, basic scoreboards were built in various places.

In 1874 scores were fixed on a board next to the ground’s telegraph box. From 1881 to 1901 a  cricket scoreboard, or  ‘scoring board’, displayed plenty of detail  at the city end of the ground. 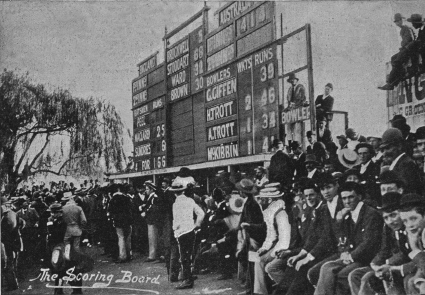 The MCG’s first permanent scoreboard, a large brick structure built in 1901 at the city end, stood until 1926.

Victor Trumper bringing up his century in the January 1911 Test against England, in front of an appreciative crowd, and the 1901 brick scoreboard. Photo courtesy of the Melbourne Cricket Club, first published in The Australasian, 14 January 1911.

Shortly before the 1901 board was operational The Australasian’s cricket columnist “Felix” (journalist Tommy Horan) wrote:

‘The new brick scoring apparatus is a very substantial structure of brick, and when finished it will look all right, I think. The cost altogether will be about £800, and the public will get the fullest information as to the state of the game. When one looks at this most colossal affair, and thinks of the old days, when the little black-board recorded the figures small and dim, the contrast is so remarkable that the evolution of the scoring board may fairly be termed a special feature of modern cricket.’ (Cricket Chatter column, 5 October, 1901.) 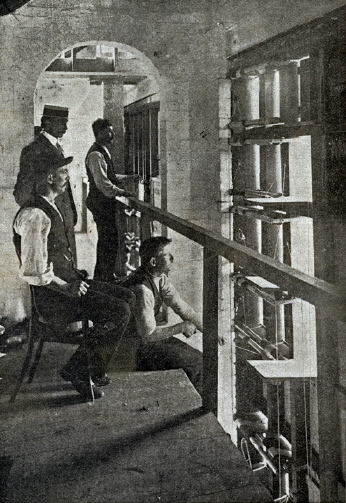 Inside the 1901 brick scoreboard. Photo courtesy of the Melbourne Cricket Club, first published in The Australasian, 23 November 1901. This photo is part of the Hidden History of the MCG exhibition at the National Sports Museum.

A second permanent scoreboard (the scoreboard now at Manuka Oval in Canberra) was built in 1907 and initially located at the eastern end of the MCG. The Melbourne Cricket Club’s annual report of season 1907-08 noted: ‘The completion of No.2 scoring board also took place. This additional board has been much appreciated by visitors to the ground during big matches, as everyone now attending can see how the game is progressing. The total cost was £852.’

The board’s dimensions were, to use the imperial measurements of the time, 60 foot long, 30 foot high, and 12 foot deep. (Approximately 20 metres by 10 metres by four metres)

The 1907 board had three floors, connected by a staircase, and a number-changing system featuring a handle driving a bicycle chain around a sprocket that turned over numbers on a fabric roll. (Such a system is still in use at the Junction Oval in St Kilda, the Coburg City Oval, and Manuka Oval.) 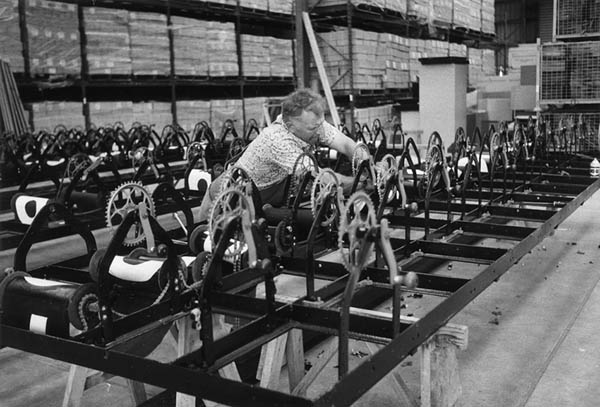 Tradesman Walter Kariuk works on a section of the MCG scoreboard shortly after it was moved to Canberra in 1982. Photo by Glen McDonald, courtesy of ACT Heritage Library, Canberra Times Collection.

One hundred years ago the two MCG scoreboards told you not only the scores of a football game but matched the names of footballers with a then-new concept, numbers on the backs of the players’ jumpers. In the 1911 second semi-final the western (or city) scoreboard had details of the Essendon players and the eastern scoreboard the Carlton players. 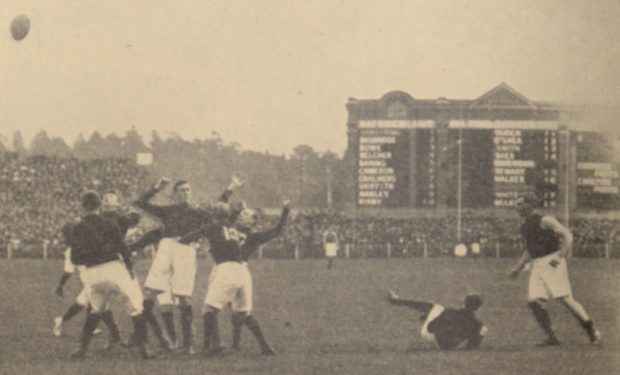 One man who knew the 1907 scoreboard inside out was Joe Kinnear, the main operator of the board from 1932 to his retirement just after the 1977 Centenary Test.

In 1961 E.W.Tipping, a journalist with The Herald, watched the first half of the semi-final between Footscray and St Kilda from inside the scoreboard. In his regular column In Black and White, he wrote: ‘Only company is Joe Kinnear, the supervisor of the scoreboard, who’s kept much too busy to talk. Joe has to keep his eye on the ball all the time. Just imagine if you put the wrong score up in front of about 90,000 people!

‘Joe is the MCG painter. Except on Saturdays. Place is a credit to him, too. He’s been in charge of the scoreboard here since 1932. As far as cricket is concerned. They had to get someone else to do the job in the ‘thirties. Joe was otherwise engaged. He played half-back for Melbourne…

‘We thought of having a go at putting the scores up, but decided against it. You’ve got to be on the ball to get them right. Goals and behinds are simple enough. It’s those points you’ve got to watch.

‘We can add up in sixes all right, but up here the figures on the back of the fabric rollers are back to front. Disconcerting!

‘Decided not to risk getting things back to front in all the excitement. Seemed no  trouble to Joe, though…

‘Things seemed to be going o.k. at half-time. Scores tallied with the goal umpires’ figures. The umpires signalled to us as they went off. Joe signalled back with a white flag through our slit that we’d got the message. And up went the notice underneath us: “scores correct” – and we relaxed.’

As Joe Kinnear was pondering retirement, MCC secretary Ian Johnson was scouting the world for an electronic scoreboard to eventually replace Joe’s home away from home. 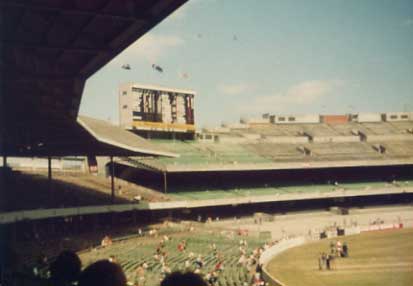 The  1907 scoreboard’s last Grand Final was Carlton’s win over Collingwood in September 1981. Its last Test match was Australia’s 58 run win over the West Indies, when Kim Hughes made 100 not out (of a total of 198) on Boxing Day and Dennis Lillee took 7 for 83 in the Windies’ first innings.

The scoreboard was dismantled in January 1982 and by March of that year a Mitsubishi Diamond Vision video replay screen, only the fifth in the world at the time, was in its place.

The MCC newsletter of February 1982 described the new scoreboard as ‘a giant television screen measuring 10.85 metres (35.6 feet) by 7.235 metres (23.74 feet). The picture comes from 38,500 pixcels, each consisting of a single cathode ray tube with a single colour phosphor…It can produce every effect you receive on your TV set, it can take satellite pictures and any sort of radio or television signal. The potential for its use is eye boggling. It can show any event taking place anywhere in the World…

‘With the revolution that has taken place in cricket over the past few years, is it outlandish to suggest that, in the not too distant future, umpires may call for a replay of close stumping and run out decisions?

‘One thing is certain, Diamond Vision is taking the MCG into the eighties with a flourish.’

The scoreboard was operated like a television editing suite, from a carpeted control room behind the scoreboard, with 16 screens.

Writing in 1981 of the  imminent demise of the Joe Kinnear-Bert Haines 1907 scoreboard and its revolutionary replacement, Age journalist Alan Attwood commented: ‘The main attraction of the proposed new board seems to be its ability to show instant action replays. But it is a little sad that something people have seen and wondered at for 80 years is to be replaced by an electronic marvel showing us what we saw just a moment before.’

And while the old manual scoreboard is still in use after 104 years, the Diamond Vision scoreboard was replaced after a decade, superseded in 1992 by a $7.2million board five times brighter and 40 per cent larger. Two years later MCG fans had scoreboards in stereo, with a copy of the 1992 board built at the eastern or Punt Rd end of the ground, beneath the top deck of the Olympic Stand. 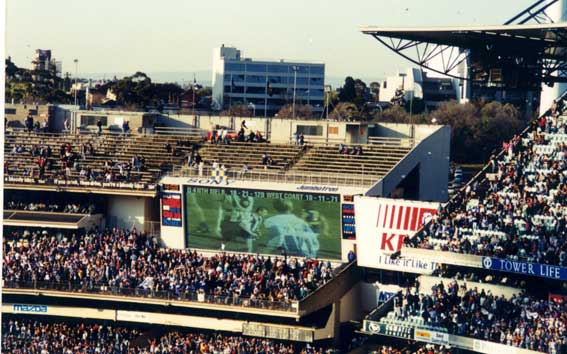 The scoreboards at the MCG have witnessed many dramatic sporting moments but in August 1999 the city end scoreboard had its own dramas, when it caught alight during the Round 22 night game between Richmond and Carlton. Play was delayed for close to half-an-hour and the scoreboard was, not surprisingly, not used for the rest of the match (which was won by Richmond).

The scoreboard was back in action the following weekend, the first week of the finals. The Hidden History of the MCG exhibition, currently at the National Sports Museum, includes a melted glass and metal lighting module from the fire. It looks like a large, burnt Rubik’s Cube. 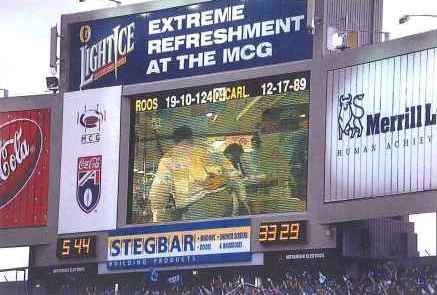 During large-scale redevelopment of the ground between 2002 to 2005, the MCG’s scoreboards were a combination of temporary, rebuilt and new screens.

The first of the current scoreboards was completed in time for the 2004 football finals, with the second major board ready twelve months later. The MCG also has relatively simple scoreboards that are contemporary versions of the old ‘boundary fence’ scoreboards.

The main scoreboards are nine metres high and 17 metres wide and are operated by Stadia Media, a company that specialises not just in providing scores but providing venues with such services as signage production, rights management and technology maintenance. 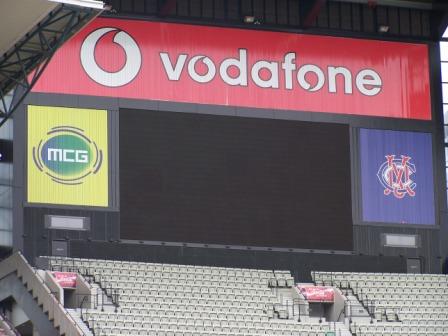 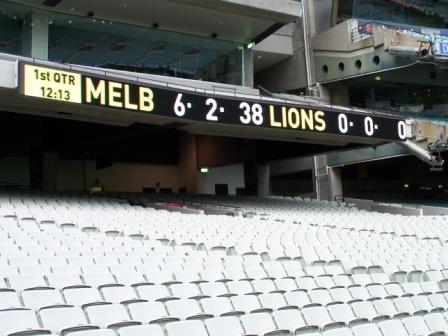 The heartbeat of the MCG scoreboards is a room adjacent to other media: the host television broadcaster, radio and the press. Effectively a television studio control room, it can have up to forty people on Grand Final Day and as little as half-a-dozen during a Sheffield Shield game. At the 2010 Boxing Day Ashes Test there were 25 staff.

But only two people are needed to present the score of a cricket game at the MCG: one to identify the players and one to keep score. (For some events only one person is required.)

Those not keeping the score are kept busy with filming, editing, replays, advertising, graphics, audio, ground announcements, and social media. 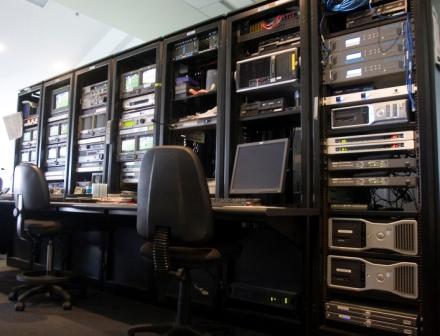 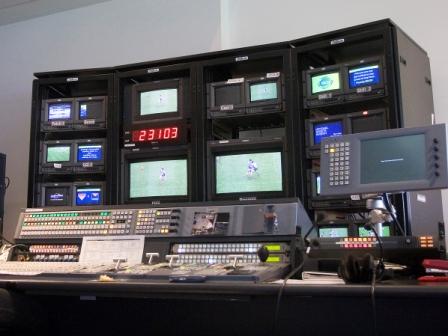 Stadia Media have made their own software for the scoreboards they operate. It’s called the Score Sight VSI:1700 system and is described by the company as ‘a modern, flexible, cost effective proprietary scoring system designed for display on stadium scoreboards, video screens and information boards.

In one shape or another, Stadia Media has been involved with MCG scoreboards for thirty years, from the inaugural electronic scoreboard of 1982 to today’s giant screens. The sports media company’s clients  also include the Gabba, Bellerive, the SCG, the Adelaide Oval, the WACA, Tennis Australia and the Melbourne Storm.

‘Tipping sees it in style’, by E.W.Tipping, In Black and White column, The Herald, 2 September 1961

Pavilions in the Park: a history of the Melbourne Cricket Club and its ground by Alf Batchelder, Volumes 1 and 2, Australian Scholarly Publishing, 2005

Hidden History of the MCG,  an exhibition at the National Sports Museum,  runs until late May 2012.  The exhibition’s scoreboard material includes several archival photos and also lighting modules from the 1999 scoreboard fire. Elsewhere in the National Sports Museum you’ll find the ‘Border’, ‘7’, ‘8’ and ‘duck’ signs that were once part of the manual scoreboard. You’ll also find the scoreboard in the background of a famous photo of Ron Clarke at the 1956 Olympics.